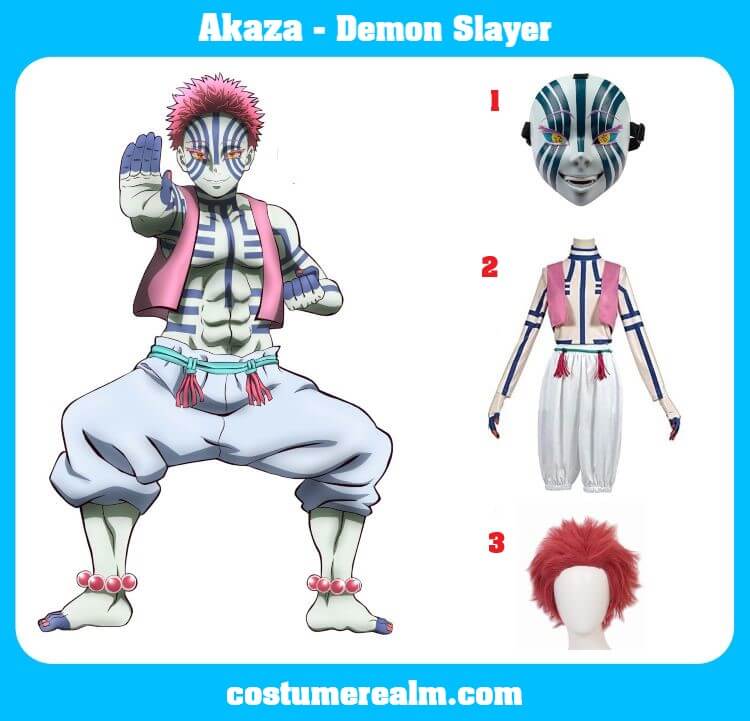 You need the following items for your Akaza Halloween costume: 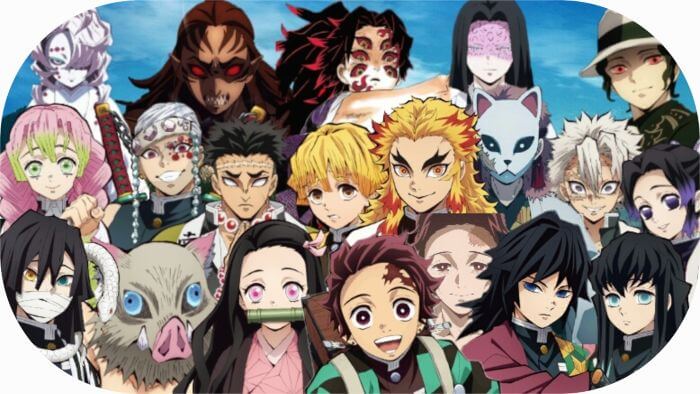 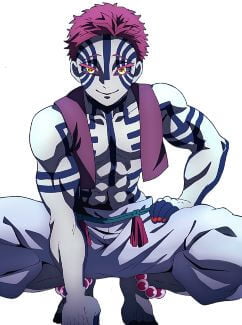 As a demon, Akaza took the form of a tall and muscular young man whose skin was so fair it appeared a brilliant greenish-white and decorated with a pattern of thick blue lines resembling the criminal tattoos he had as a human. Akaza had short, light pink hair that billowed around his head and inturned yellow eyes with pink lashes and blue sclera that looked a bit like cracked glass.

The centerline ran straight across his chest to halfway down his stomach, and the other two branched out to the sides across each side of his chest to connect with the other two lines, following the same three-line pattern around his waist repeated. Lines ran down his arms along the front of his shoulders and merged into two more that circled his biceps before continuing to his wrists, below which it could be seen that each of his fingers was also dark blue with an orange fingernail, including the top of his toes unusual appearance. 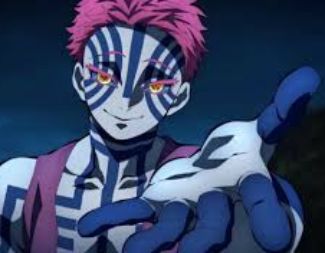 Akaza is a strong, stubborn, and combative Social Darwinist who enjoys fighting, especially against powerful Demon Slayers. He intentionally protracted fights to savor every moment of them, and also complimented his opponents when they unleashed powerful techniques or lashed out at him, usually noting that their techniques and swordsmanship are magnificent and fascinating. Akaza looked down on anyone he considered weak, so much so that his skin would crawl at the sight of them. However, he genuinely respected those who in his eyes were strong and demanded to know their names, and would not stop until he found out; He remembers all the names he has memorized as a tribute to their strength.

Akaza also offers those whose strength he recognizes the opportunity to become demons, as he believes that retaining their refined techniques and abilities was the right thing to do, and it hurts to see those with extraordinary gifts decay as they get older and so they go to kill to preserve their great abilities themselves should they decline his offer to become a demon. Akaza also does not discriminate against strong warriors who were previously weak, as shown when he praised and congratulated Tanjiro Kamado, although he knew how weak he was when they first met, even going so far as to kyojuro for tanjiros to thank. Akaza is a strong believer in Social Darwinism and believes that natural law dictates that all weaklings must be eliminated.

Akaza had a deep-rooted psychological need to become stronger and didn't get along with his peers from the upper ranks, seeing them as his rivals. He is particularly antagonistic and somewhat jealous of the top two ranks above him, Doma and Kokushibo, who lash out at Doma and vow to kill Kokushibo. Even after being knocked down and decapitated during his fight against Tanjiro and Giyu Tomioka, he stubbornly persevered and kept fighting, realizing that he definitely had to become the strongest until he could overcome the common weakness of all of Nichirin's demons through decapitation and swords could do nothing but sheer willpower and determination. It was later revealed that Akaza's desperate and stubborn quest for strength was to heal his ailing father and protect those he loved and cared for, namely his fiancée Koyuki and his teacher Keizo.

Akaza also possesses a deep hatred for his past life as a human, believing it was absolutely worthless, and hating anyone or anything that reminds him of things like Tanjiro's own view of how the strong should help the weak and Giyu's unwavering determination to which Akaza is recalled by Keizo, both instances to which he reacted negatively.