You need the following items for your Alyssa from The End Of The F ing World:

Alyssa, bored and skeptical of ordinary people, aims to make James, an outcast, her new boyfriend.

James asks Alyssa about a date and they go to dinner, but it fails because she insults the waiter.

Alyssa was 17 years old when first appeared, now in season 2 she is 19. Not much about Alyssa's personality has changed since season 1.

Alyssa is shown to be quite a confident, stubborn and sometimes vulgar young woman, who has a taste for adventure and is essentially bored of life. Even before she meets James, she tells us about her reckless behavior towards other people around her, explaining that she threw a chicken kiev at her step-father's head after he told her to get a bigger bra size as well publicly smashing her own phone in retaliation after her friend in front of her had sent a message instead of simply talking to her. However, this could have been a result due to the distant relationship between her and her biological father and lack of attention from her mother.

When she meets James, Alyssa is first intrigued by him and his personality difference from other "normal" people. She doesn't seem to get embarrassed by swearing in public, which is shown at the diner and asks the waitress for an " extra fucking spoon" and when called out for it, she then asks for a "great big banana shit, with extra fucking cherries." and calls the waitress a "fucking cunt". 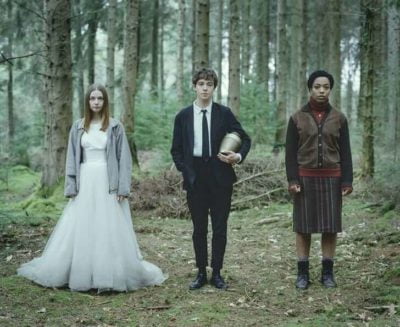 Dress like Alyssa (wedding dress); In most part of the The End Of The Fucking World Season 2 Alyssa is seen in her wedding dress. In order to dress like Alyssa you need a similar looking wedding dress or a white dress, black boots, light brown wig and brown eyeliner for freckles. To complete your Alyysa look don't forget to get a loose, gray jacket