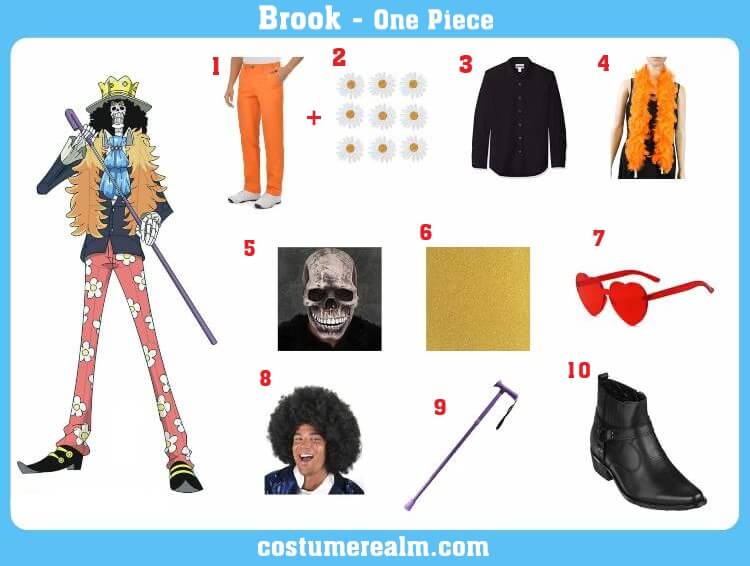 You need the following items for your Brook Halloween costume: 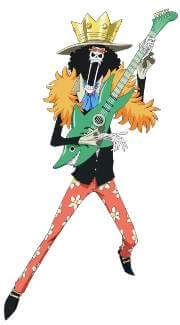 Brook's Accessories: To complete your Brook Halloween costume, you also need an orange feather boa, heart-shaped sunglasses, and a purple walking stick. Don't forget to get a skull mask and a big golden crown.

Brook is the musician of the Straw Hat Pirates. He is the ninth member of the team and the eighth at the end of the Thriller Bark Arc.

Brook ate the Yomi Yomi no Mi, which allowed him to extend his life after death. Brook eventually learned to use the powers of his devil fruit more deeply, which gave him control over his own soul and the souls of others. His dream is to meet his old friend Laboon on Reverse Mountain, where he lives with Crocus.

Originally a member of the Rumbar Pirates, he died and was resuscitated by the power of Yomi Yomi no Mi. However, due to the time, it took for his soul to find his body, he was reduced to a skeleton, with only his afro remaining intact. Brook drifted solo in the Florian Triangle for 50 years but met Luffy and served as the Straw Hats ally during the thriller Bark Arc before officially joining the crew.

When he returned to Sabaody Arc through Fish-Man Island Arc, he dressed in more colorful and high-quality clothing as if he was a rock star. He wore heart-shaped sunglasses, a yellow feather boa, a new top hat with a giant crown on the brim, and orange-red trousers with a floral pattern. Although he was a skeleton, he grew to 9'1 "during the two-year time jump.

During the Punk Hazard Arc, he wore a flashy striped coat after removing it from a member of Brownbeard's Centaur Patrol Unit.

During the Dressrosa Arc, he wore yellow trousers and a dark magenta long coat with a turned-up collar. While this bow was being shown on Zou, his second outfit consisted of a pink shirt with a white polka dot pattern (similar to the circles on the SMILE fruits), orange and yellow striped pants, and pointy dark shoes. He also wore his original top hat from the past and swapped his heart-shaped sunglasses for traditional black ones.

During the Zou Arc, he adds a dark coat with a fluffy lining to his second pink outfit, along with a larger, beaded top hat. Hunted and nibbled at by his canine mink admirers, his coat was a little torn when he met with Luffy's group.

During the Whole Cake Island Arc, he wore a long, fancy puff-sleeved coat and tall black boots. He also wrapped a decorative scarf around his head and wore simple black sunglasses. Later, after the Big Mom pirates took off his clothes, he wore a simple sleeveless cloak with a rope around his neck to hold it in place. When meeting the Fire Tank Pirates, he wears a large felt hat, a black and red striped vest, as well as a dark shirt, a yellow ascot, and brown trousers. While participating in the Big Moms Tea Party destruction operation, Brook disguised himself among the Luffy clones who became Charlotte Brûlée's powers, wearing an oversized Luffy mask and stringed hat that brought him close enough to Carmel's photo.

Kin'emon took advantage of the Wano Country Arc from its ability to change Brooks' appearance while also allowing him to blend in with the country. Brook now wears a pure white kimono with a triangular headband and two arrows in his body - an appearance that can be attributed to a ghost, since Kurozumi Orochi's Oniwabanshu members consider him Gasha Docuro. Before the attack on Onigashima, Brook wore samurai armor with a kabuto helmet and cloak. He also wears a katana in place of his shikomizue. When he left for Onigashima, Brook swapped his samurai armor for a black vest and tie, as well as a top hat. Like everyone else involved in the robbery, Kin'emon Brook wore a pirate disguise with a dark fur coat and a unicorn hat.

Other One Piece Cosplay Ideas