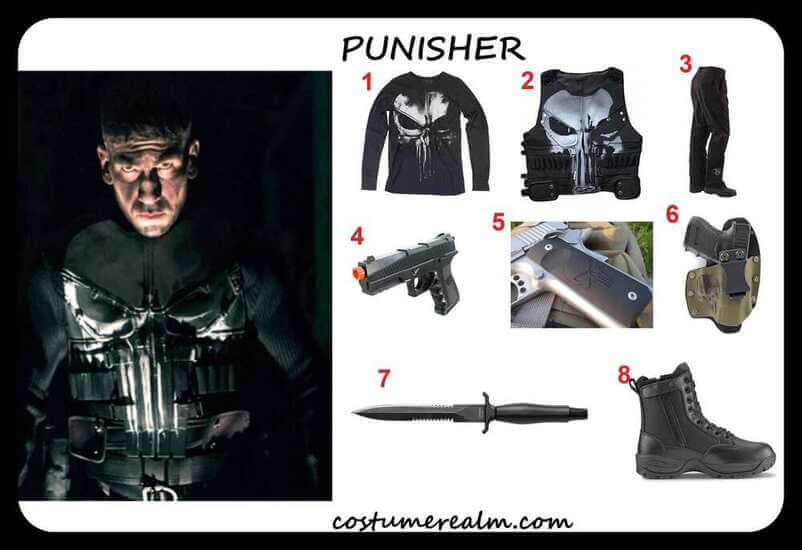 You need the following items for your Punisher Halloween costume: 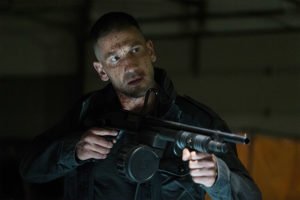 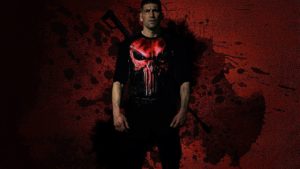 Francis David "Frank" Castle Sr. is a violent vigilante and former member of the United States Marine Corps who joined the Cerberus Squad while serving in Afghanistan. Afraid that he would slowly lose his honor under the command of Agent Orange, Castle returned to his family only to lose them all during a brutal shootout. Castle became a Punisher because he wanted to use all means to free New York City from all crimes. While trying to avenge the death of his own family, Castle also came into conflict with Daredevil. Castle was soon arrested and sentenced to life imprisonment despite the efforts of Nelson and Murdock. Castle was liberated with the help of Wilson Fisk, however, and discovered that the blacksmith was in fact the one responsible for the murder of his family.

How To Dress Like Frank Castle From The Punisher

Castle gave up his identity and tried to live a quiet life before he was found by Micro, who informed him that more people had been involved in the death of his family and that they were involved in the illegal Operation Cerberus, which he carried out in Afghanistan would have.

While chasing everyone involved, Castle came into contact with his friend Billy Russo, who he eventually learned about working with William Rawlins to try to murder Castle. After discovering the truth, Castle let himself be caught by Russo and Rawlins until he finally killed Rawlins and in a brutal showdown managed to irreparably disfigure Russo's face. After Rawlins' crimes were exposed, Castle was finally released by the CIA and tried to start a new peaceful life for itself.

Castle's attempts to lead his peaceful life failed when he discovered that John Pilgrim was chasing Amy Bendix before he learned that Billy Russo had also escaped from custody. With Bendix at his side, Castle returned to New York City with Dinah Madani to help Madani and Curtis Hoyle prevent pilgrims and Russo from causing havoc. The Punishers finally uncovered a conspiracy that linked Bendix to Anderson and Eliza Schultz while defending themselves against Russo's crew.

When he was certain that Bendix was safe from harm, the Punisher tracked down the now fatally wounded Russo and finally executed him before devoting his life to Punisher wherever he could and locating criminals and executing them.