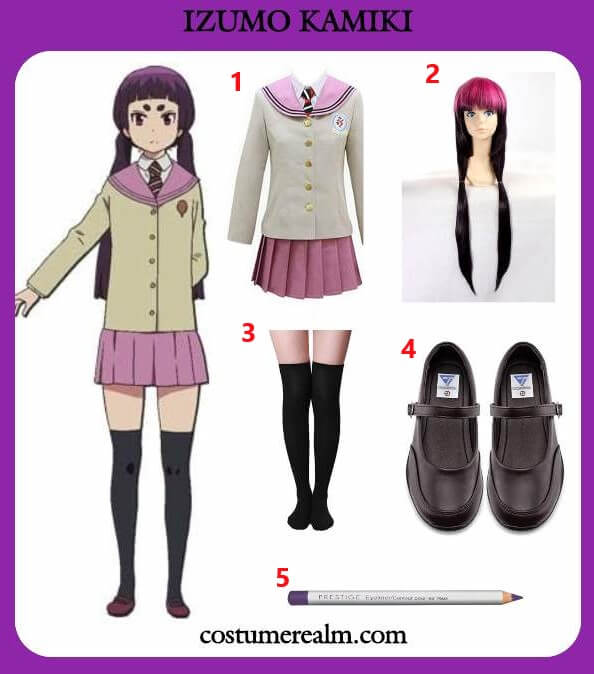 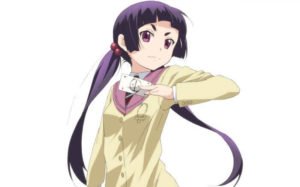 Dress like Izumo Kamiki from Blue Exorcist ( Ao no Exorcist); Izumo Kamiki is a top student at the True Cross Academy Exorcism Cram School. It comes from a long line of shrine maids.

Izumo is a young woman with a slim figure and a delicate appearance. She has fair skin with a rosy tint, a round face with fine facial features, large dark red eyes with a cat-like shape and small oval eyebrows and long dark purple hair, which she usually keeps in a twin tail or ponytail hairstyle. Her eyebrows are why Rin Okumura nicknamed her Polkabrows. Yohei also called Izumo "sweet".

Her outfit is primarily the school uniform, which consists of a white-colored shirt with a red and black school tie, a large bow, tight white stockings, a short pink skirt with a black belt and black shoes. It turns out that she wears a push-up bra so as not to look flat. For ritual dances, Izumo wears a priestess with a fox mask, a haori coat with a floral pattern and two subjects.

In her opinion, Izumo is someone with a bad attitude who hates losing, being very cold, dull, and condescending to those around her, except for her closest friends. Like Ryuji, she almost always frowns, one of the few times she isn't when she smiles smugly at someone's expense. Although not cruel, Izumo is somewhat manipulative and takes advantage of Shiemi's naivety when asked to be her friend by essentially making her her servant.

About Izumo Kamiki From Blue Exorcist

Despite her cold nature and initially arrogant attitude towards others' goals, Izumo occasionally shows genuine kindness and consideration for others, even if she doesn't look that way. This causes them to encourage their friends when they are frustrated and eventually to recognize their different priorities. Although Izumo is an exorcist, she is open and even curious about demons, notices their differences and respects them, while finally realizing that all things complement each other. This made her the first exwire that Rin accepted after learning that he was the son of Satan and berating the others for their mistreatment.