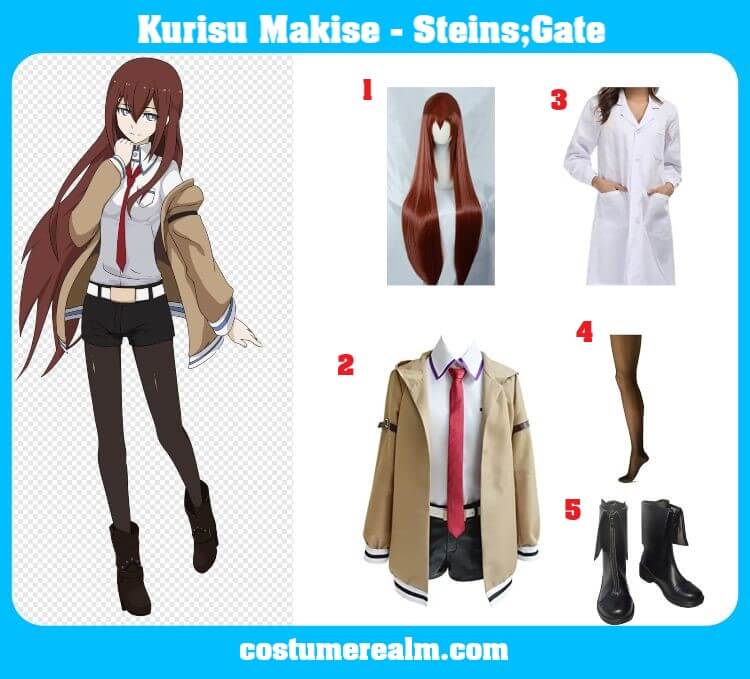 You need the following items for your Kurisu Makise Halloween costume: 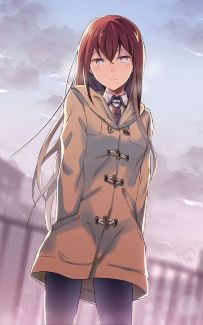 Kurisu is a slender young woman with waist-length auburn hair and matte purple eyes. Her hair, which she prefers to wear loose, ranges in ginger tones from mahogany to auburn. She has an unusual fashion sense, her outfit consists of a white long-sleeved shirt with blue trim and a red tie. Her shirt is tucked into black shorts over black tights held up by a white belt with a gold buckle. Her red tie hangs loosely around her collar and she wears a loose khaki jacket that covers her thighs and has black and white straps at the end of both sleeves and along the hem used to hold the entire jacket on her arms. She also wears a pair of black boots that are partially undone and folded down. Once "recruited" into the Future Gadgets lab, Okabe gave her Daru's white lab coats, which he never uses and often wears around the lab. 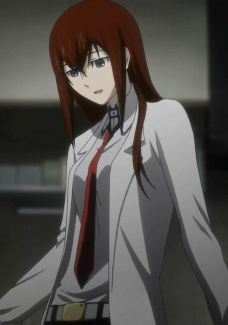 Kurisu is generally a sensible, serious, mature young woman, usually calm and collected even when someone seems tense in front of her. However, she can sometimes show a much more shy side. She is frequently shown to hate wearing nicknames as she dislikes all the names Okabe gives her, with "The Zombie" annoying her the most. Ironically, on the rare occasions that she uses her real name, Okabe takes it as a sign that something is seriously wrong. Kurisu is also practical and realistic, almost to the point of failure; Initially, she strongly believes time machines are fiction and refuses to believe the Phonewave is one even after seeing them in action, claiming that Okabe simply saw what he wanted to see. The group must look up SERN's research on time travel to finally convince Kurisu of the truth. In Steins;Gate 0, however, she doesn't deny the possibility of time machines and will build one of her own if she has the materials.

As mature as she is, Kurisu is highly sarcastic and often expresses this through her interactions with Okabe and Daru, the former due to his eccentricities and frequent insensitivity, and the latter due to his perverted remarks. Apart from these two, she is quite friendly with everyone as long as they don't engage in inappropriate acts and constantly engages in petty arguments, especially Mayuri, whom unlike the male members of the lab, she takes an instant liking to. In general, it largely depends on how Kurisu treats others; She sometimes says disrespectful things to respectful people, but she is usually friendly. She has been repeatedly described as a tsundere by Okabe and Daru, although she gets annoyed when someone calls her that, usually by doing something that ironically proves her point.

Kurisu says that she is not good at sports but likes to swim. More than the pool itself, she likes the feeling of floating in the water. Kurisu describes it as freed from gravity, like a burden lifted by muscles. Swimming puts Kurisu in such a good mood that Okabe no longer returns her name when she calls her "assistant". Kurisu can swim very well, although Okabe believes everyone was a "hikikomori".

Although hesitant to admit it, she is a frequent user of the @channel textboard and goes by the netname "KuriGohan and Kamehameha". Okabe happily gets her to admit this habit, much to her chagrin. When she posts on @channel her personality is noticeably different as she often uses Netspeak or emoticons to communicate and her posts are generally much less mature than her usual dialogue.

Her achievements despite her youth have exposed Kurisu to the jealousy of those who claim to be her superiors. This includes her own father, who despises her because she overshadows him and lets him fall into oblivion. This is the reason for her bitter attitude, which she adopted as a defense mechanism to hide her vulnerabilities. At heart, Kurisu is a very curious girl who loves science and cannot resist an interesting experiment. She occasionally makes statements about how data collection should be viewed before privacy, which has led Okabe to label her a mad scientist, much to her annoyance.

Although Kurisu begrudgingly admits her feelings for Okabe, she actually loves him. This was shown many times throughout the series and most prominently when she was intoxicated.