You need the following items for your Maki Zenin Halloween costume: 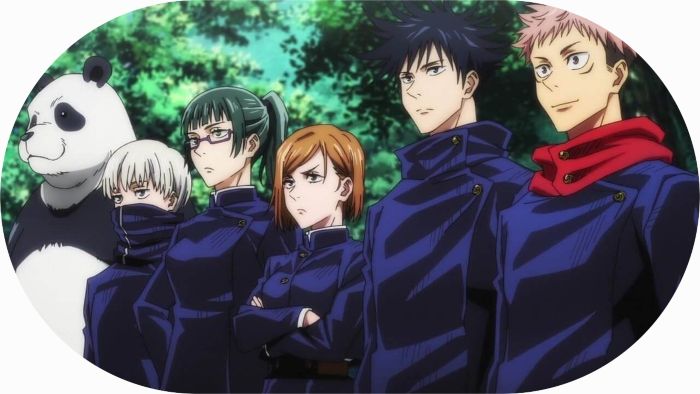 How To Dress Like Maki Zenin From Jujutsu Kaisen Maki is a young woman with a tall, athletic build. She has small golden eyes and long dark green hair that is usually tied in a short ponytail. She wore different glasses that allowed her to see curses.

Maki's original Jujutsu High student uniform consisted of the traditional long-sleeved jacket with a skirt. As a freshman, she wore thick, long brown socks and black shoes with her uniform. As a second grader, Maki wore different glasses and black leggings instead of socks. Maki Zenin is an important supporting character in Jujutsu Kaisen and one of the main characters of the predecessor Jujutsu High. She is currently a sophomore at Tokyo Jujutsu High. Maki was born to Ogi Zenin and Mai Zenin's older twin sister in the Zenin family.

Born into one of the Big Three wizarding families, Maki was not a sorceress and was subject to constant abuse, eventually excluding her from the Zenin clan. She aspires to become a great jujutsu wizard to defy her family and instead works closely with her friends Panda and Toge Inumaki while also serving as a role model for the first year students.

Maki is a very headstrong and straight forward person who tries to push himself without needing the help of others. She is extremely strong willed, capable and motivated to escape the standards set for her by people who should be her family.

In a wizarding clan, strong curses are everything, but Maki couldn't even see curses. Women in wizarding clans are required to be even more conspicuous, resulting in Maki being constantly subjected to severe mistreatment and abuse from the Zenin clan. Despite feeling cursed by her own blood, Maki is motivated to become a strong sorceress, regardless of what her family thinks. She wants to break open the foundation of her way of life and completely discard it.

Maki can seem quite cold at times, even to her classmates. She's the leader type, but Maki is very harsh on others and tends to be impatient and hot-tempered. Maki doesn't seem to respect Satoru Gojo as a person due to his very goofy attitude. Even as her teacher and senior, Maki often refers to him as an idiot. She was initially very mean to Yuta because of his shy attitude and openly told him that as a cursed human he had nothing to do with attending Jujutsu High.

While working on a mission together, Maki and Yuta got to know each other better, and she realized that they weren't all that different. She asked Yuta why he enrolled in the school and he told her that he wanted life to be acceptable for him. Maki told him that it was about Jujutsu High and encouraged him to use his curse to save people.