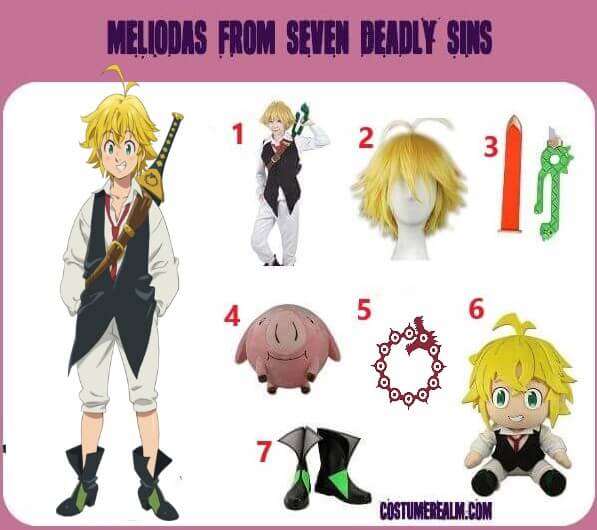 You need the following items for your Meliodas Cosplay: 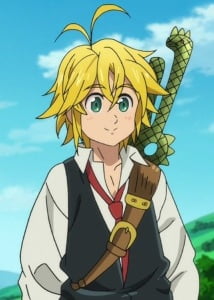 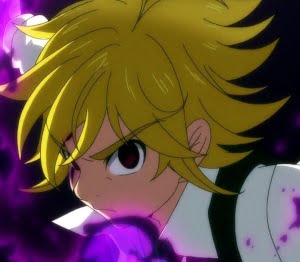 Meliodas is the dragon's sin of anger and the captain of the seven deadly sins. He is the main protagonist of the series and was the owner of the well-known tavern Boar Hat. Its sacred treasure is the demon sword Lostvayne and its inherent power is full of counters. He was also the head of the Ten Commandments when Meliodas loved Jiai no Meriodas and was a former member of Stigma. He is the older brother of Zeldris and the eldest son of the demon king.

Despite the appearance of a child, Meliodas is actually much older and more than three thousand years old. He is exceptionally small compared to other characters, has messy blonde hair and a pair of emerald green eyes. He also lacks facial hair, which further emphasizes his youthful appearance. Regardless of his stature and youthful appearance, he is relatively muscular and has a number of well-developed abdominal muscles. He often wears an ordinary, clean white shirt with a button placket and a black sleeveless vest with a loosely worn tie. The sheath of his broken sword is held by a green leather belt with gold-colored buckles. He wears a pair of black boots without socks. The most distinctive feature is the dragon symbol, which is engraved on the top of his left bicep just under his shoulder.
When Meliodas was the leader of the Ten Commandments, he wore a white, sleeveless coat adorned with a row of black X-shaped buttons around the high collar, a black lining on the coat, a dark red color on the inside, and a coat tail , He also had black pants with matching boots. Meliodas also wielded a large but slender sword, which was destroyed during his battle with Elizabeth against the demon king and the Supreme Deity.

During his tenure as leader of the Holy Knights of Danafor, Meliodas wore their traditional armor, similar to that of Cain Barzad. Ten years ago, like the other sins, he wore silver body protection with a unique helmet. He also wore a dagger that appeared to be his sacred treasure. Like the rest of the sins, Meliodas received a wanted poster after being framed for the murder of the Great Holy Knight Zaratra. The latest edition of his wanted poster doesn't exactly show him, but by chance his brother Estarossa.

Meliodas wears a new outfit based on the Kingdom's infiltration sheet. a long-sleeved white tunic with a high collar over an undershirt, a pair of gloves, knee-length black trousers and black boots. This outfit is more formal than a uniform with the "boar hat" on the back.

After his time in purgatory, Meliodas now has seven permanent scars in which his hearts are located and bears a new black spot, similar to what he previously had as the leader of the Ten Commandments. He is now wearing the debut outfit he previously wore.

In his attack mode, Meliodas covers himself in the dark. This looks like a vest-like coat that only covers his armpits, flickers at ragged ends, and has a very high collar that is spread wide. He also has two bracelets from the same darkness as the rest of his clothes. His pants are tied to his feet and look like claws from a bird, but with five toes.

In purgatory, Meliodas' emotions wear a blue v-neck vest, which is made from the skin of indigenous species and has three silver diamond-shaped buttons. The vest covers his shoulders and slightly exposes his chest with a small, turned-up collar and easily opens at the hem. The blue gloves and knee-length pants have a leather-like look and both have the same diamond-shaped button. Meliodas also seems to wear shoes more than his usual choice; Boots.

After Meliodas fulfilled all commandments and became a vessel for the demon king, he became a tall and muscular adult with long hair, a white full-body jersey, golden boots and gauntlets and two long, claw-like projections that gathered his back from a dark matter. He also has several black spots around his body, including the symbol of his dragon on his shoulder.

After the demon king was driven out of his body, Meliodas returned to his previous appearance. Meliodas also took on a new form, much like when he was obsessed with his father.