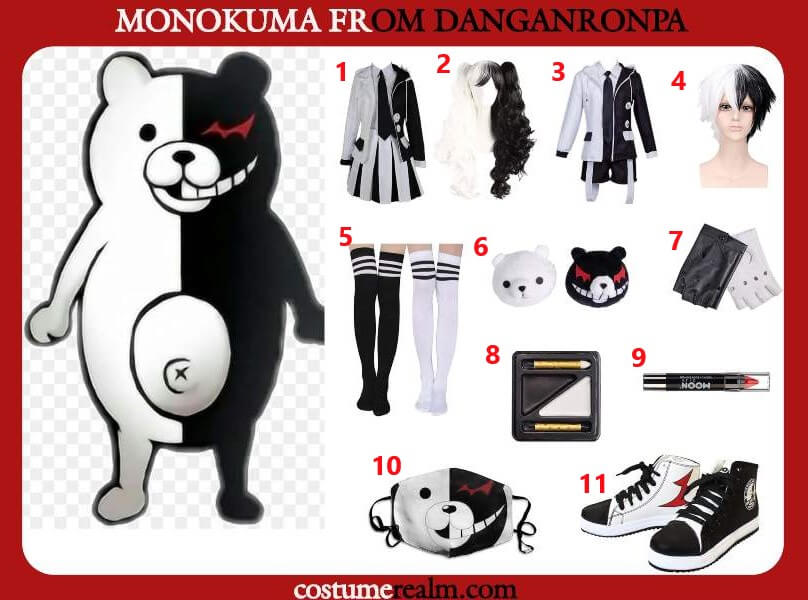 You need the following items for your Monokuma Halloween costume: 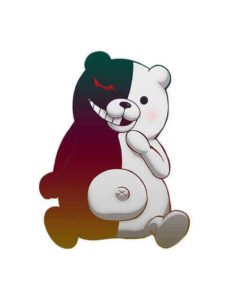 Monokuma is a stuffed robot bear and the self-appointed headmaster of Hope's Peak Academy, who initiates the life shown in Danganronpa: Trigger Happy Havoc in the deadly school.

Later he takes over the Killing School Trip presented in Danganronpa 2: Goodbye Despair and throws Usami out.

Monokuma is a bear whose whole face and body are divided into two parts by the middle. It is similar to the yin-yang symbol, in which there is a balance between two opposites, similar to a “river”. The right side is white and has the classic expression of a teddy bear. While its left side shows a more eerie look. It's black, has a red, horizontal, jagged eye that resembles the Hope's Peak Academy logo, and an evil smile.
Although it is completely divided into two opposite sides, the only parts of Monokuma that are not affected by the division in its area are the muzzle and the belly, since both remain white. He also has a large, obvious navel at the bottom of his stomach. Its protruding navel has an "X" shaped mark. There were a lot of wires in him because he was a robot and a bomb.

In Danganronpa 2, Monokuma wears a light blue suit with a white shirt and a long red tie around his neck. The collectible monokumas wear different outfits. In Chapter 1 he wears a bikini made of shells and has a red hibiscus in his right ear. In chapter 3 he has a red poncho and sombrero. In Chapter 5, he appears to wear a COMP from the Megami Tensei series.

In the wizard of Monomi, Monokuma wears a golden royal crown with three blue diamonds. He also wears a red royal cap around his neck and body.