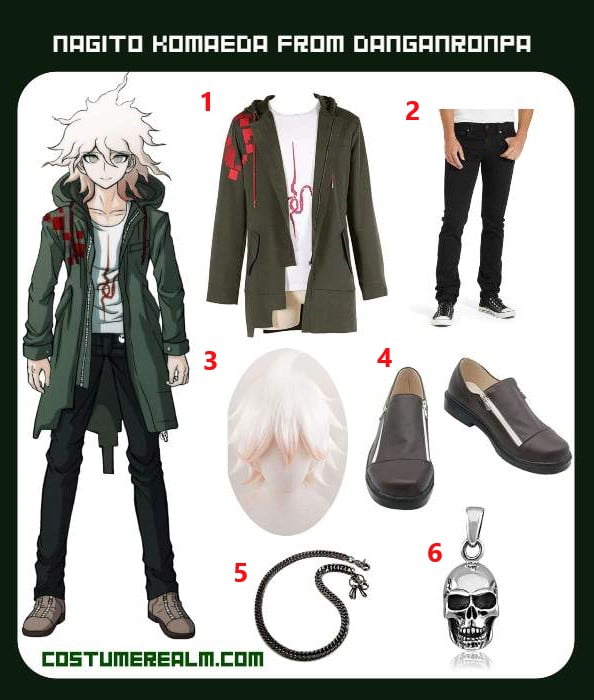 You need the following items for your Nagito Komaeda Halloween costume:

Nagito Komaeda is a 77-B student at Hope's Peak Academy and a participant in the Killing School Trip presented in Danganronpa 2: Goodbye Despair. His title is the Ultimate Lucky Student.

Together with class 77-B, he returns to Danganronpa 3: The End of Hope - Peak High School to explore her school life before the tragedy.

He also appears as "Servant" in Danganronpa Another Episode: Ultra Despair Girls. He returns as protagonist of the OVA Super Danganronpa 2.5: Komaeda Nagito to Sekai no Hakaimono and explores his ideal world.

Nagito is a tall, thin young man with particularly broad shoulders, sickly pale skin and light gray-green eyes with thick eyelashes. His shoulder-length and naturally wavy hair has an unnaturally pale pinkish-white color that fades to white the closer to his scalp, and looks like it doesn't belong to "any living person". In Danganronpa 2 his hair has a slightly warmer, cream-colored tone, in Danganronpa 3 his hair appears silvery-white with shades of gray. Due to the events of Danganronpa Another Episode, which is a few years later, his hair is longer, messier and darker.

Nagito wears a thin, knee-length dark green zipper coat with a jagged tail that he leaves open. It has a red square pattern over the right shoulder and a large, square "55" on the back, as well as two red cords that are pulled through the hood and hang down on both sides of his chest. Underneath he is wearing a white t-shirt with a scoop neck and a red pattern on the front, which reminds of two interlocking hooks. He wears simple black jeans, a wallet chain with a skull pendant and light brown shoes, each of which is closed with two zippers.