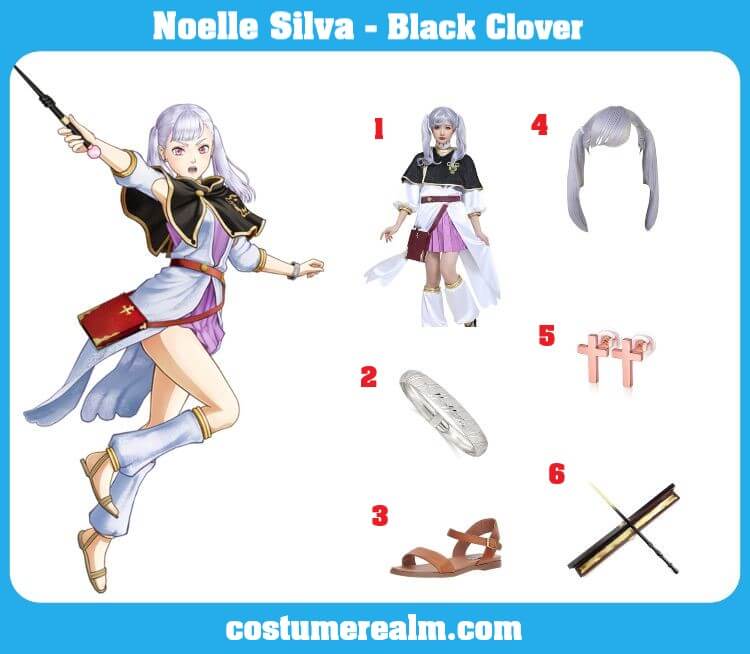 You need the following items for your Noelle Silva Halloween costume: 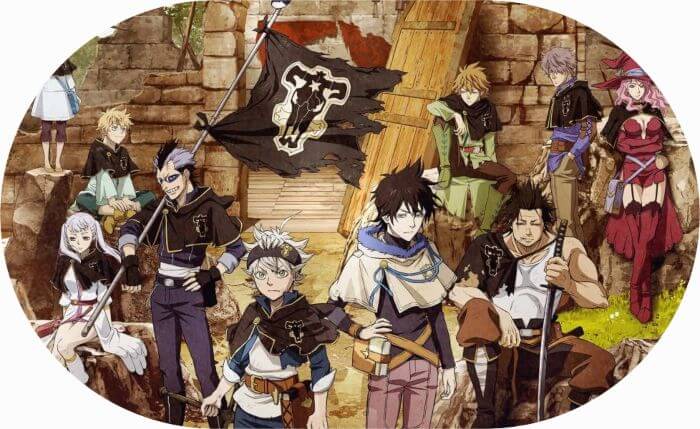 How To Dress Like Noelle Silva From Black Clover 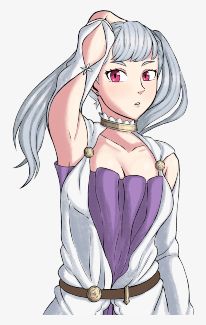 Noelle is a 15-year-old girl. She has a slim build and pink eyes. She has long, silver hair that is usually tied in pigtails and falls in a bang in the center of her forehead. She also wears a pair of purple pommel stud earrings and a silver bracelet on her left wrist. She wears a sleeveless, backless, short purple dress covered by a silver blazer. The blazer features a backless design with back-attached sleeves that extend slightly past her elbows with gold-tone cuffs. In addition, it has ruffled edges and a rounded tailcoat that reaches to the knees. The blazer also reaches down to the neckline, where it is gathered at the edges and held together by a gold medallion. She wears a brown leather belt carrying her pouch, which is a similar color and has gold detailing on the corners. The pouch is to her right and contains her spellbook. She also wears a pair of silver-colored leg warmers with gold-colored cuffs at both ends and a pair of sandals. As a member of the Black Bull Squad, Noelle wears her black squad pattern, which looks like a gold-trimmed hooded cloak. 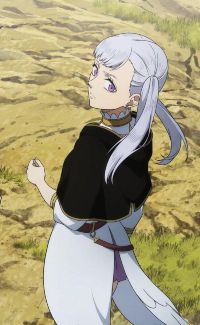 Noelle Silva is a noblewoman and the second daughter of the House of Silva of the Clover Kingdom, one of its royal families. Besides, Noelle is a 3rd Class Junior Magic Knight of the Black Bull and Royal Knights Squads.

Born into the royal family, Noelle can come across as arrogant and vain. This is seen as she denies Asta's act of friendship while also announcing that she has not given him permission to speak to her.

This also causes her to have trouble admitting her mistakes, as she often tries to find excuses or blame someone else for her mistakes. Having finally overcome her difficulties in acknowledging her mistakes, Noelle can also be seen as very reticent about expressing delight in her accomplishments when she would rather suppress those feelings with her usual stern facial expression. She is said to have good taste in objects, as shown when she says Magna Swing's broom is lame.

However, when rejected by her own family, who had noticed that she had no control over her magical powers, Noelle developed a slight inferiority complex to her more accomplished brothers and sisters. This inferiority complex causes Noelle to try to prove them wrong, to the point of overexerting herself during training. Also, she is skeptical of those around her and expects them to react in the same way as her family.

She is also quite humble as she is embarrassed that her shirt is torn and her boobs are slightly visible after the dungeon mission and she is also a bit embarrassed to wear her bikini on the beach.

Due to the influence of the Black Bulls, especially Astas, Noelle slowly gets more self-confidence. This brings out a bolder side, where she's even willing to take on opponents like Vetto and her own brother, Solid.

Kahono points out that one reason Noelle did not have magical control is because of her desire not to hurt anyone. This shows that despite her shortcomings, Noelle is a kind person, which sets her apart from most nobles. Another aspect that sets her apart from other nobles is that she has less prejudice against commoners, which is shown during the Star Awards Festival where she comforts a child, stating that everyone should enjoy the celebration, regardless of status.