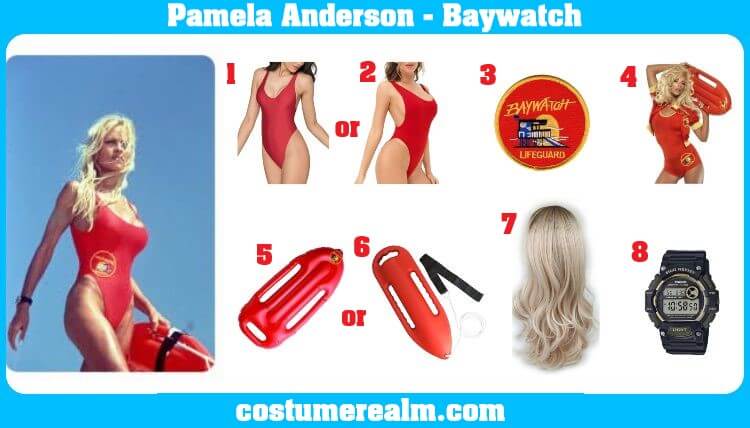 You need the following items for your Pamela Anderson Lifeguard costume: 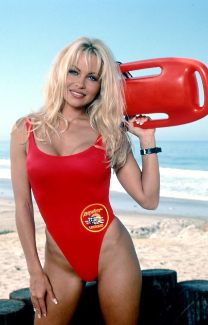 Lifeguard Outfit: In Baywatch, Pamela Anderson wears a red Swimsuit. Two types of swimsuits were prepared. You can choose the swimsuit you want.

Pamela Anderson Wig: Pamela Anderson's regular hairstyle is seen on Baywatch. If you are not a blonde you may use a bombshell wig.

Pamela Denise Anderson, formerly known as Pamela Anderson Lee, is a popular model, actress, and activist who played the role of Casey Jean "C.J." Parker has been with Baywatch for five years, making her one of its most popular and longest-serving performers. She later reprised her role in the reunion film Baywatch: Hawaiian Wedding, making a cameo as Captain Casey Jean Parker, C.J.'s mother in the film version. She also appeared as one of the interviewees on a July 2001 episode of Baywatch on The E! True Hollywood Story series.

Pamela's first television role was as a tool girl Lisa in the comedy Home Improvement, which launched her acting career. She later also starred as bodyguard Vallery Irons in V.I.P. where she was also an executive producer and had various roles in films including the title character in Barb Wire, Becca Kotler in Scary Movie 3 which also starred Jenny McCarthy, Dee Twiddle in Blonde and Blonder, and Invisible Woman in Superhero Movie in several commercials.

She later wrote and published two books, Star in 2005 and the sequel Star Struck in 2006. She then teamed up with Emma Dunlavey to publish a 2015 book of a mixture of pictures, memoirs, and poetry entitled RAW and then A Relationship guide to publishing Lust for Love: Rekindling Intimacy and Passion in Your Relationship with Rabbi Shmuley Boteach in 2018.

She is now the leader of an activist organization called the Pamela Anderson Foundation, which supports organizations and individuals who are on the front lines to protect the human, animal, and environmental rights. Though she hasn't completely turned her back on acting.