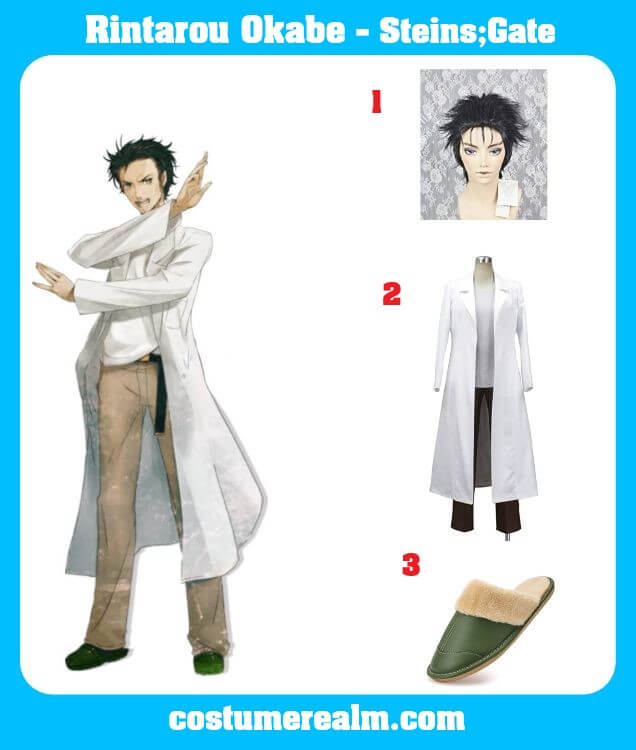 You need the following items for your Rintarou Okabe Halloween costume: 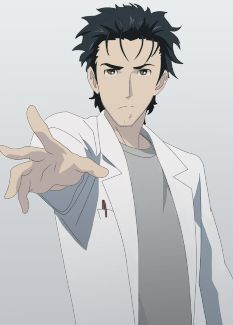 Okabe has a young man with a square jaw and bony cheeks. He has his short black hair slicked back and has brown irises, with a small amount of stubble on his chin and cheeks.
Rintaro also wears a lab coat that hits his shins, a light gray t-shirt, and khaki pants. A red pen protrudes from the breast pocket of his lab coat and he wears a military-style black cloth belt around his pants. He has dark socks and wears green slippers when in the lab. 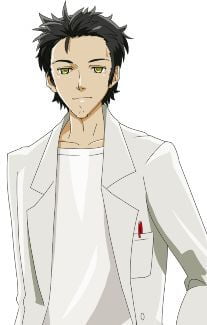 Okabe is a melodramatic, eccentric, and rarely tsundere person. He is a self-proclaimed mad scientist who happily adopts his "true name" "Hououin Kyouma" and often uses it to introduce himself to others. This makes him slightly hypocritical as he calls Kurisu a series of names that irritate her to varying degrees. On the other hand, there are some who like his nicknames like Luka Urushibara, with the name "Lukako" affectionately alluding to his feminine nature.

Okabe was also socially inept, to the point that he saw absolutely nothing wrong with yelling at Kurisu's face for calling him "Okabe" instead of "Hououin Kyouma" and couldn't understand why she cried afterwards, even though she did explained it sarcastically. In fact, his social skills were so poor that Kurisu thought the infant Mayuri was normal in comparison. However, he does not hesitate to help people he has never met, as shown by his first encounter with Luka. Though highly intelligent, Okabe is easily fooled; When Kurisu told him via D-mail that he was an airhead, he believed her claim that it was a compliment, only later realizing that this essentially meant his head was full of air.

Okabe likes to pose as an agent working against a certain "organization" that he assumes is always after him, as he believes this type of image gives him a cool and mysterious aura, despite the story seems to disappear over time. probably with SERN replacing the malicious "Organization" image. In the case of Steins;Gate 0, it's STRATFOR, DURPA, and the Russian Secret Service. He usually appears delusional and paranoid, displaying eccentric mannerisms such as talking to himself on the phone and insane fits of laughter. He seemed to have a bad case of Chuunibyou early in the series, but that's just one side of his character. There are several occasions when the anime shows what he's thinking, portraying him as rational and possessing great situational awareness.

It is later revealed that his "mad scientist" role is largely a facade he wears to make life interesting for his dear childhood friend, Mayuri. After the death of her grandmother, Mayuri fell into deep despair, but Okabe pulled her out by acting like an anime character and declaring her his hostage. He later sheds his Chuunibyou facade as he witnesses Mayuri's multiple deaths and reveals a serious side of himself that he didn't show in the first half of the series while working hard on all the previous D-Mails, he created - all you need to get is the IBN 5100 and prevent Mayuri's death. Dozens of time jumps make him quite cynical, depressed and hectic. He develops a guilt complex, believing himself to be responsible for everything that happens and frequently blaming himself when things go wrong, even when he had no control over them or couldn't possibly have seen it coming. An example is when he blamed himself for preventing Suzuha from leaving on the night of the storm, resulting in her memory loss and failure to locate the IBN 5100, despite Suzuha's insistence that the entire ordeal was her fault for not going straight back to 1975 and instead stopped in 2010 to find her father.

After Kurisu's death in Steins;Gate 0, he becomes increasingly unhappy to the point of experiencing panic attacks from distant references to Makise Kurisu and having to actively take anxiety medication. Okabe had gradually wallowed in his own misery, his guilt complex weighing on him and refusing to make any more time jumps, even with the knowledge of Suzuha of the inevitable event of World War III in the beta attraction realm, should he break away from the solution solve action keep away. He had also completely given up the identity of Hououin Kyouma and chose to live as a normal university student, causing great uneasiness in his circle of friends. As the series progresses, he regains a strong desire to see the future of the Lab memes to the end and reverts to his former behavior. A notable achievement is that he jumped backwards 3000 times as of 2036 to ensure this.

In the Suzuha ending, Okabe's personality is severely warped and twisted as he is forced to choose between rescuing Suzuha or rescuing Mayuri. Despite this, he soon acts like the old man again when confronting Suzuha.