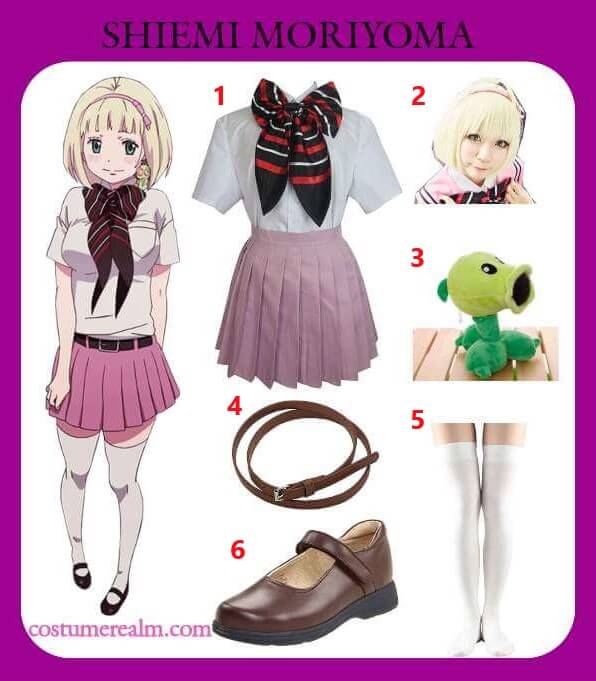 You need the following items for your Shiemi Moriyama Cosplay costume:

How To Dress Like Shiemi Moriyama From Blue Exorcist 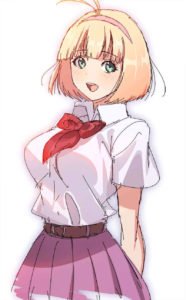 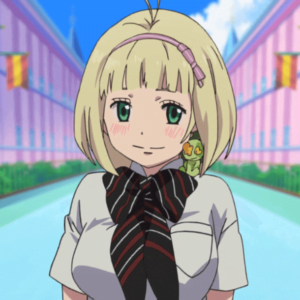 Shiemi is a fair-skinned girl with straight, shoulder-length platinum blonde hair, who occasionally curl at the ends and can usually be seen with a clip or headband and green eyes. At her first appearance, Shiemi wore colorful kimonos with equally colorful Haori and occasionally went barefoot. After entering Exorcist Cram School, she puts on the school uniform, which consists of black shoes, a short pink skirt with a black belt, tight white thigh highs and a white shirt. She also wears the female version of the school tie, which is tied with a large bow. Shiemi also has remarkably large breasts despite her figure, which shocked all the guys when they first saw her in school uniform when the kimonos she normally wore hid her figure.

When Shiemi first appeared, she was a very shy and calm girl in school. When she was younger, she was terribly shy and sick so she couldn't go to school, which made it difficult for her to have friends of the same age. Because of her love for her late grandmother, she never wanted to leave her garden, although she finally did it with the help of Rin Okumura and Yukio Okumura.

Shiemi is also very naive - most of her life has been spent on the premises of her house, so she grew up helpless about typical youth experiences and without real friends. Her desire to make friends becomes a point where she thinks she is too young to be romantic. She says she just doesn't have the time or level of comfort for a friend, especially since she really wants to focus on becoming an exorcist.

About Shiemi Moriyama From Blue Exorcist

She is incredibly loyal, patient and hardworking; She would do anything for her friends, even if it would make others feel uncomfortable. In one episode when she aimed to have friends at school, she humbled Izumo Kamiki, but instead of hanging out with her and having fun, Izumo used her kindness by always asking her to run errands and make her a servant close. This ended up with Rin Okumura making it clear to her that friendship shouldn't be like this. Respecting each other means more than loving a friend. Their exceptional friendliness, enormous willpower and good nature have made them popular with the exwires.