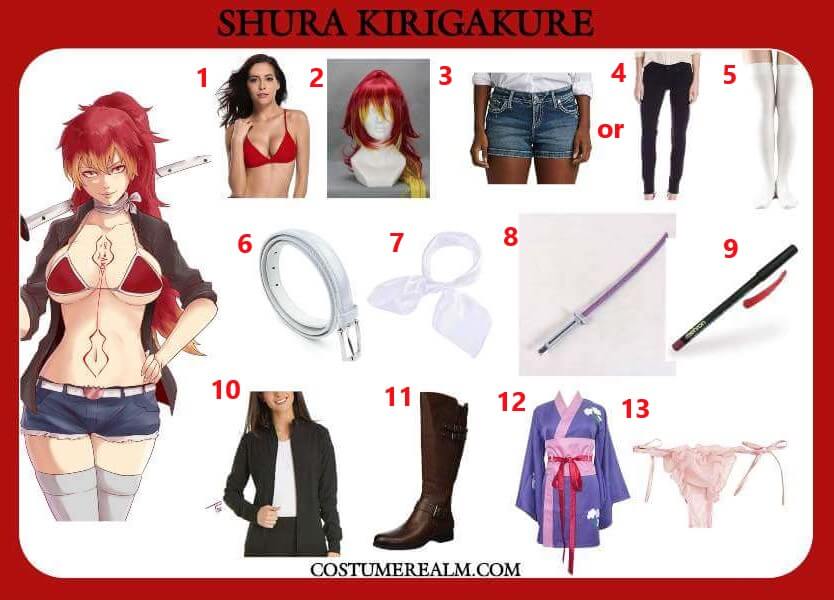 You need the following items for your Shura Kirigakure cosplay costume: 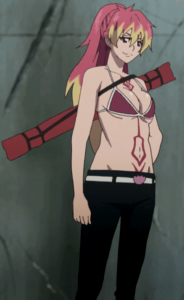 Dress like Shura Kirigakure from Blue Exorcist;  Shura Kirigakure is a top exorcist and mentor to Rin Okumura. She trained under the direction of Shiro Fujimoto to achieve the title of Master as Knight. She officially works as an inspector for the Vatican, but has infiltrated the True Cross Academy, first as a student under the name Yamada and later as a teacher for the exwires. 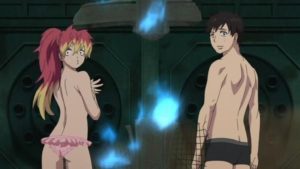 Shura has long and faded red-colored hair with blonde ends that resemble flames that she maintains in a high ponytail, green eyes, and full lips. She has a curvy figure with large breasts, which Rin Okumura considers larger than that of Shiemi Moriyama, and a mark on the chest and belly, which serves as a seal for various objects. She usually wears a very insightful bikini top, shorts and sometimes stockings as the bottom of her outfit or a denim jacket. After being hired as a teacher at Exorcist Cram School, Shura wears an unbuttoned school jacket and tie. She also carries a license indicating her name and position, and a key with a coat of arms on it that symbolizes her position.

When she first appears as Yamada, Shura appears to be very quiet and socially withdrawn. She prefers to play on her PSP rather than pay attention to the lesson. She doesn't get along with the others and refuses to help them during the ghoul incident. In truth, this personality is just a facade - since she is already an exorcist, she does not have to pay attention to the lessons.

About Shura Kirigakure From Blue Exorcist

Shura appears to be quite concerned about her real age when she tells everyone that she is 18 when Yukio alluded to the fact that she is 26.

After the Aomori incident, she becomes more open to her feelings of threatening Mephisto if Rin and Yukio are hurt because of him, which surprises even them.