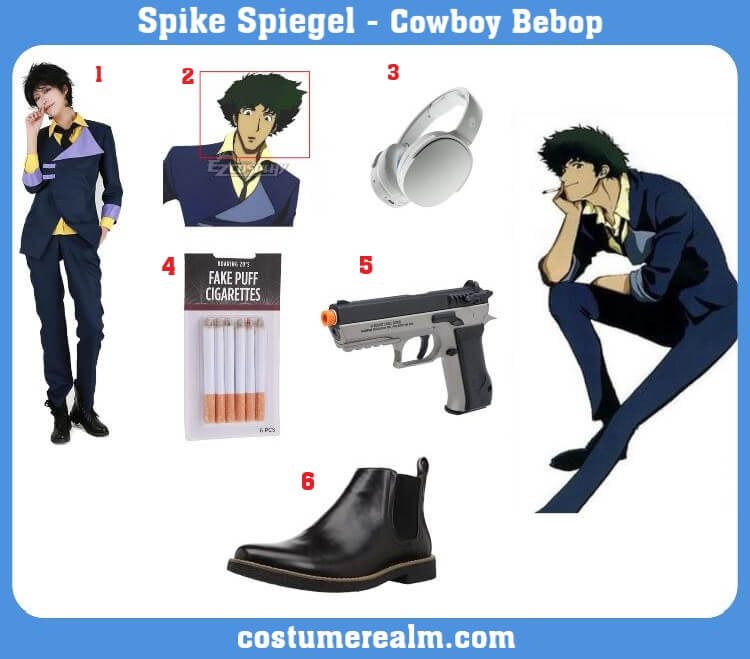 You need the following items for your Spike Spiegel cosplay costume:

How To Dress Like Spike Spiegel From Cowboy Bebop

Spike Spiegel's Costume: Spike mostly wears a navy blue classic cut dress suit with 2 duct tape like buttons. His dress shirt is yellow, and he wears it in a messy style.

Spike Spiegel's Hair: Just like his outfit, Spike's hair is also messy. It is dark in color. 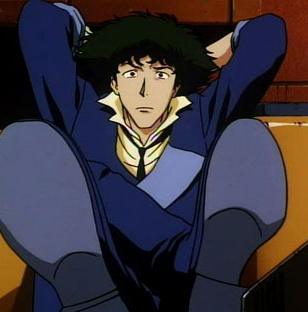 Spike is quite tall and slim. He has dark hair and brown eyes. It was later revealed that one of his eyes was  surgically replaced with an artificial eye, which is fully functioning.

Spike typically wears a blue comfort suit with a yellow shirt and black Chelsea boots. From time to time, he also wears a long brown trench coat. He smokes a lot and is seen with a cigarette between his lips, even when it is raining or there is a clear “No Smoking” sign posted where he is sitting, standing or walking through.

Spike is a lazy, easygoing, indifferent, and lazy person. He is mostly on the bebop lounging, watching TV, or sleeping. Very rarely, he practices Jeet Kune Do, a martial arts practice in which he is very skilled and is passionate about Bruce Lee and his philosophies, among others. He's an inveterate smoker who can be seen in virtually every shot with a cigarette in his mouth. Although he rarely admits it, Spike has very little patience. He keeps saying he hates dogs, kids, and women with attitude, and others are less than happy when each of the three joins the bebop. Most recently, over the course of the series, he warmed to Edward, Ein, and Faye, all of whom fielded in the three things he hates category. He also claimed to dislike cats. Spike is rarely seen happy about anything, and even more rarely does he say he likes something.

He usually behaves phlegmatic and walks slouched, almost, as if sleepwalking. He seems to be tormented by the ghosts of his past and frequently has nightmares about his life in the Red Dragon. Furthermore, he believes he has already died once and thus does not often show fear of the possibility of being killed, often pretending to attempt death. As a famous clip on his Swordfish II ship put it, “Whatever happens, happens.”

One of the recurring themes surrounding Spike's character is how he views himself and his life. After implantation of an artificial eye, his left eye, the real one, sees the past while the synthetic right eye sees the present. This makes the past indelible in his memory and does not allow him to get rid of or forget it. Despite this, he typically encourages others to forget the past as “not important”. Spike's zodiac sign is Cancer, which matches his inability to let go of the past.