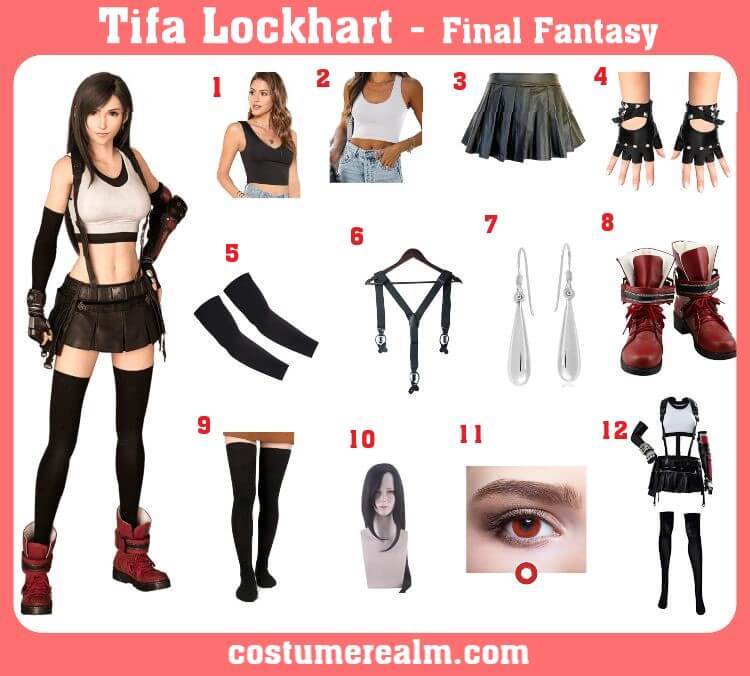 You need the following items for your Tifa Lockhart Halloween costume:

How To Dress Like Tifa Lockhart From Final Fantasy 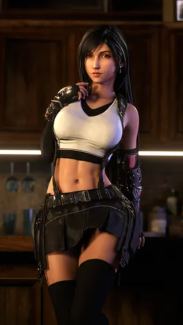 Tifa Lockhart's Costume: Tifa is a dream girl for most Final Fantasy fans. She is very good-looking. In Final Fantasy VII, Tifa wears a black tank top underneath a white tank top and a black pleated (only in remake) mini skirt with suspenders.

Tifa Lockhart's Accessories: To complete your Tifa Lockhart Halloween costume, don't forget black thigh high socks, red boots and black fingerless gloves. She has red eyes, so you may want to get red colored contact lenses as well. If you don't want to DIY your costume, full Tifa costumes are also available for all budgets.

Tifa's signature attire in all of her appearances is a variation of a sleeveless shirt that exposes her waist, a mini skirt, and a white teardrop earring on her left ear. There are three variants of this attire, which are her standard Final Fantasy VII costume, her tour guide cowgirl costume, and her leather suit costume. In Final Fantasy VII, Tifa wears  a black mini skirt with suspenders and a white crop tank top. She wears red and black elbow length gloves, black socks, red boots, and a metal pad on her left elbow. In the remake, her skirt is now pleated to make it easier for her to practice her martial arts, she wears black shorts underneath and a black sports bra underneath her white tank top.

Tifa grew up side by side with Cloud in Nibelheim, but they lost connection some years ago. Upon meeting him again, she persuades him to join Avalanche to fight the Shinra Electric Power Company, which hates for destroying their hometown. She supports Cloud as his friend and helps him and his allies in the fight against Sephiroth. Reserved and empathetic, Tifa behaves like a mother towards her allies, offering encouragement and emotional support.

Tifa has waist length, dark brown (nearly black) hair, that is tied at the ends in a tail. In Final Fantasy VII: Advent Children and some other appearances, her hair is medium length. Tifa has red eyes, although in some appearances they are brown. She has an athletic and lean, and she has visible abs.

Tifa's Nibelheim tour guide outfit is a cowgirl outfit with a short leather skirt and vest with pockets,  a white shirt showing her stomach, a buttoned corset, a belt around her hips, cowboy boots, and a hat. Her leather suit is a white tank top beneath a black zip-up vest and black revised shorts that fold up at the waist to create an extra-convenient pouch at the front and a short dust coat at the back that reaches to the heels. She wears a pink ribbon around her left arm in memory of Aerith and a Fenrir Ring on her right hand. She wears short black gloves.