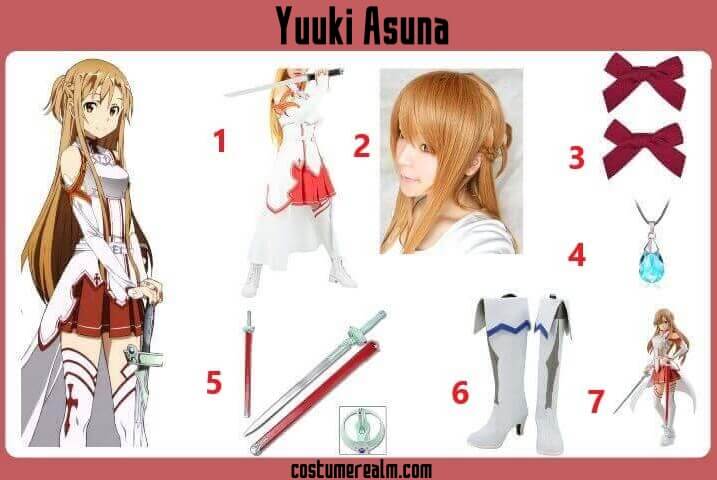 You need the following items for your Yuuki Asuna Cosplay costume:

How To Dress Like Asuna From Sword Art Online 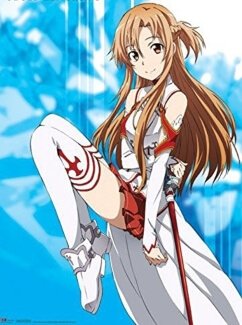 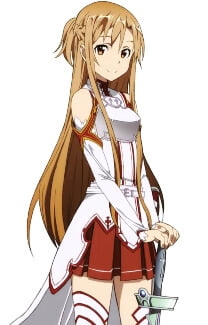 Yuuki Asuna, known as Asuna in Sword Art Online, ALfheim Online and Project Alicization, where she temporarily used the Stacia account, is one of the main heros of the Sword Art Online series, the Deuteragonist of the Aincrad bow and the protagonist of the mother's Rosario side story. She is the daughter of the former CEO of RECT Inc. Asuna was one of the 10,000 players trapped in Sword Art Online, where she was the sub-leader of the Knights of the Blood guild. Her skills with the rapier earned her the nickname The Flash.

Asuna has long, orange-brown chestnut hair and hazel eyes. In the early SAO levels, she wore a dark red leather tunic with a light copper breastplate and leather pants with boots up to her knees and a hooded coat. After joining the Knights of the Blood, she wore a red and white uniform that all KoB members wore, and a Lisbeth rapier named Lambent Light. After the incident on the scale of orders, Asuna began to wear the promise ring that Kazuto had given her on the left ring finger.

Asuna's avatar as creation goddess Stacia takes care of her auburn hair and light brown eyes. She wears pearlescent armor and a long skirt made of countless fine fabrics.

Asuna's original avatar in ALfheim Online was the Fairy Queen Titania. She was wearing a white outfit with a long white skirt, a crop top that showed her belly, and a red ribbon that wrapped around her top and came together in a bow. She went barefoot and wore a white stripe around her ankles.

Asuna's Undine Avatar has light blue hair with an appearance that is otherwise hardly different from her SAO Avatar.

Asuna's Sylph Avatar Erika specializes in close combat and had the most dagger skills. Therefore, she was better suited for duels than Asuna's main avatar, who was half a healer.

About Asuna From Sword Art Online

Asuna originally didn't care about dying in the game before meeting Kirito. This meeting drastically changed Asuna's personality and outlook on life. She soon takes to heart most of the things Kirito says and asks for help, using him as a kind of lifeline.

Asuna is a friendly and helpful young woman who, like Kirito, cannot fail another in trouble. She takes the game very seriously and is determined to clear it up before Kirito tells her to enjoy SAO a bit. Asuna is also a bit proud and despite her friendly personality, she won't hesitate to deal with those who question her authority or make fun of her skills, such as cooking. She even challenged Kirito to a duel after arguing about how to deal with a field manager. She is not afraid to behave and will take matters into her own hands from time to time.

Asuna, like Kirito, is someone who can be controlled and manipulated by her emotions. This can be seen during Kirito's last duel with Heathcliff on the 75th floor when she resisted her paralysis, jumped in front of Kirito and made an attack that would otherwise have killed him. Nor can she stand to see others die before her, like the ruthless attack on The Gleam Eyes after the Aincrad Liberation Force players were slaughtered.