You need the following items for your Zero Two cosplay:

How To Dress Like Zero Two From DARLING in the FRANXX

Dress like Zero Two from DARLING in the FRANXX;

Zero Two's Hair: She has long straight pink hair with bangs and a pair of little red horns on her head and a white headband over her horns. 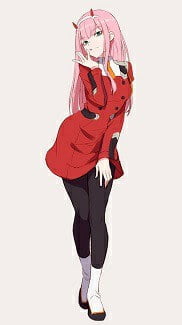 The full Zero Two attire consis of a white military cap with matching boots and coats. She is usually spotted in her signature red military uniform, black leggings, and white boots. She originally wore the 9's stamp suit: a red bodysuit with white accents. After being assigned to Squad 13, she adopted the squad's standard Pistil uniform: a white bodysuit with red accents.

As a side effect of Strelizia's aggressive riding, Her fangs and horns can grow at an alarming rate. Her eyes glow red when angry, even when wearing her Limiter headband. At one point her face was deathly pale and her eyes were blood red. Their horns could also branch out far enough to touch the ceiling, and their skin color could also revert to their original red color.

Zero Two is one of the main characters of   DARLING in the FRANXX franchise. She is a human-Klaxo-Sapien hybrid and a member of the APE Special Forces who primarily fights on the front lines. An elite parasite codenamed "002", also known as the "Partner Killer", Zero Two had always accepted solitude due to their horns and Klaxosaur blood. Although she had no respect for people or her own life and was used to fighting alone, she took an interest in Hiro and offered the opportunity to fly with her, making her a new partner and "darling".

After Hiro was able to ride her more than three times, the two became the newest members of the 13th Plantation, piloting the mighty FRANXX Strelizia. Over time, Zero Two developed romantic feelings towards Hiro. However, her determination to become fully human, coupled with Hiro's apparent fear of her increasingly wild features, caused the pair to briefly drift apart. As their partnership began to turn and slowly crumble, they realized their forgotten memories of their childhood encounter. The two chose to sacrifice their lives to ensure and ensure the survival of humanity.

1000 years later, the souls of Hiro and Zero Two reincarnate as two children who meet again and rekindle their romance.