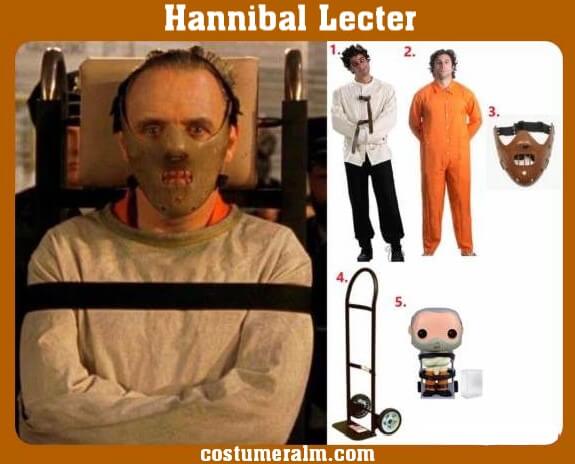 You need the following items for your Hannibal Lecter Halloween costume: 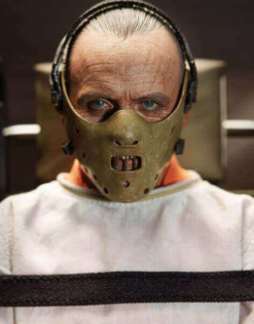 Dress like Hannibal Lecter from The Silence Of The Lambs;

Hannibal Lecter Costume: As one of the most dangerous prison inmates of all time, Hannibal Lecter wears a standart inmate uniform and a white straight jacket on top of it.

Hannibal Lecter Accessories: To complete your Hannibal Lecter Halloween costume don't forget Hannibal's mask which is the most important item of this costume and if you are serious about your costume, you also need a hand truck. 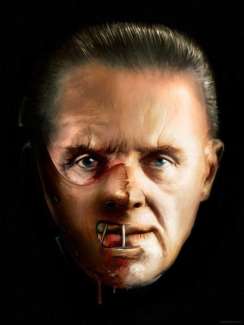 Hannibal Lecter is a Lithuanian-American serial killer, notorious for consuming his victims, earning him the nickname "Hannibal the Cannibal".

Lecter was a short and slender man, but deceptively strong, described as strong as an ant. His left hand had an extremely rare condition called midstream duplication polydactyly, which is a duplicated middle finger. After his escape, he later performed plastic surgeries on his own face several times and removed his extra finger. Lecter's eyes were auburn hue and reflected light in "pinpoints of red". He also had small white teeth and dark, widow-tipped hair combed back. His voice has been described as metallic scratchy, likely due to lack of use during his imprisonment. Due to his imprisonment and lack of natural light, his skin became extremely pale.

Lecter was extremely strong for his size, strong enough to lift a body with ease. He has exceptionally keen senses. His sense of smell was perhaps his keenest sense. He recognized Will Graham by his aftershave, even though he hadn't seen him in three years, and could identify Clarice Starling's perfume and skin cream from the day before. He could even tell Sammie's condition from his sweat. After his escape, he refused to change his nose because he wanted to keep his keen sense of smell. He had unsettling control over his emotions and body values. He could walk among vicious, man-eating wild boars without fear, he could also take his pulse when he committed brutal acts such as ambushing the nurse, and a pulse of a little over 100 when he beat an officer to death.

Perhaps his most incredible quality was his intellect. His genius is considered immeasurable and was perhaps one of the most intelligent people in the world. His intellect was on a par with Stephen Hawking and could understand virtually any subject he wanted. He was a criminal mastermind who was able to evade the authorities with his expertise in forensic knowledge and was initially only caught by luck. He also uses his list to forge a handcuff key in a maximum-security hospital, escape prison, and stay on the run. His success in escaping the authorities after he had escaped was also due to minor cosmetic surgeries and several forged ID cards by spontaneously walking around.