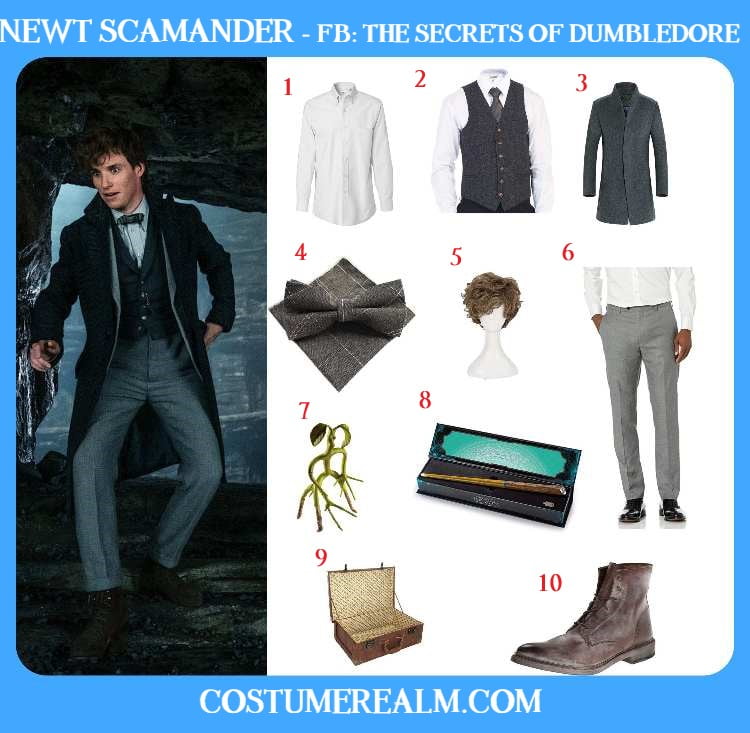 You need the following items for your Newt Scamander from Fantastic Beasts: The Secrets of Dumbledore Halloween costume:

How To Dress Like Newt Scamander From Fantastic Beasts: The Secrets of Dumbledore 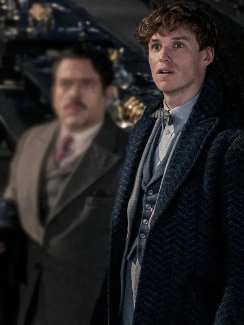 Dress like Newt Scamander from Fantastic Beasts: The Secrets of Dumbledore;

Newt Scamander' Attire: Even though the Fantastic Beasts: The Secrets of Dumbledore is set in the 1930s, Scamander preserves his 20s fashion style. For this costume, you will need a white dress shirt, a wool blend dress vest, a wool blend coat and again a wool blend bow tie, to complete your Newt Scamander Halloween costume, don't forget Scamander's wand,  also his iconic briefcase will allow everyone to guess who you are cosplaying. 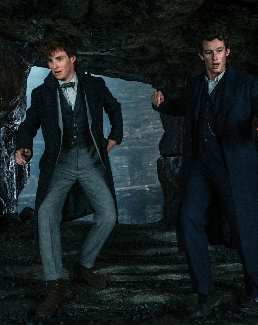 Newt Scamander is the author of "Fantastic Beasts and Where to find Them", which is used in the houses of wizards and Hogwarts and studies magical creatures. He is also the younger brother of Theseus Scamander, Porpentine Goldstein's husband, and the paternal grandfather of Rolf Scamander. He is the main character of the Fantastic Beasts series.

He is played by Eddie Redmayne, who also played Marius Pontmercy in Les Miserables.

Newt Scamander was a single-minded man who tirelessly searched for new information for his book Fantastic Beasts and Where to Find Them, even when he was supposedly retired. Considered an authority on magizoology, his work was respected throughout the wizarding community. Newton was described as an eccentric man who felt more comfortable around creatures than with people. Eye contact and proximity to another person usually caused him severe discomfort. He admitted that most people found him annoying. Newton was particularly shy with women he had feelings for, as he struggled to openly admit his feelings for his future wife Tina Goldstein. However, despite this, Newt understood that love should never be imposed on others, but instead it should be earned by effort, as evidenced by how he disapproved of Queenie's charm with Jacob and took it off.

In dealing with other people, Newt was often an extremely awkward person, uncompromising and eccentric in the opinions of his peers. He preferred the company of his magical beasts, whom he expressed horror at the thought that they might be harmed. Unlike his self-confident older brother, who was respected by his superiors, the ministry staff did not value him so highly. Newt was also confused by the affection between him and another person, he struggled to come up with an explanation for Tina about his “engagement” since the summer and did not like being hugged by his older brother. Newt himself admitted that he was short-sighted in his youth; he was also outspoken in his opinion about aurors, despite the fact that Tina Goldstein was an aurora herself.