You need the following items to dress like Rick Dalton: 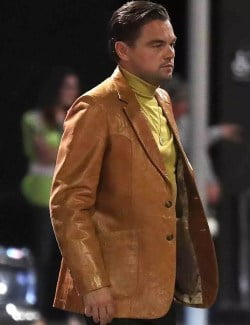 Dress like Rick Dalton from Quentin Tarantino's Once Upon A Time In Hollywood; Rick Dalton costume consists of replica of his own jacket, yellow turtleneck, brown pants, fake cigarettes if you are not a smoker and a round necklace, to complete your Rick Dalton outfit don't forget to get lion head ring and engineer boots.

Rick Dalton is an actor who appeared on the fictional western television series Bounty Law from 1958 to 1963. His attempt to get into movies failed, and in 1969 he struggled to get a breakout film reel that can still be seen on television when he is considering moving to Italy. This has become a hotspot for spaghetti westerns. He is a neighbor of Sharon Tate in the Tarantino universe. He is portrayed by Leonardo DiCaprio.

His longtime friend and stunt double is Cliff Booth. The character was partially inspired by Burt Reynolds and actors such as Ty Hardin, William Shatner, Edd Byrnes, George Maharis, Tab Hunter, Vince Edwards and Fabian Forte. Dalton is also partially inspired by Pete Duel, a western television actor who died of suicide. Although not mentioned in the film, Dalton suffers from an undiagnosed bipolar disorder. "Rick is a man full of internal turmoil and self-pity because he is not in a better position professionally. But like Rick's way, he blames everyone but himself.