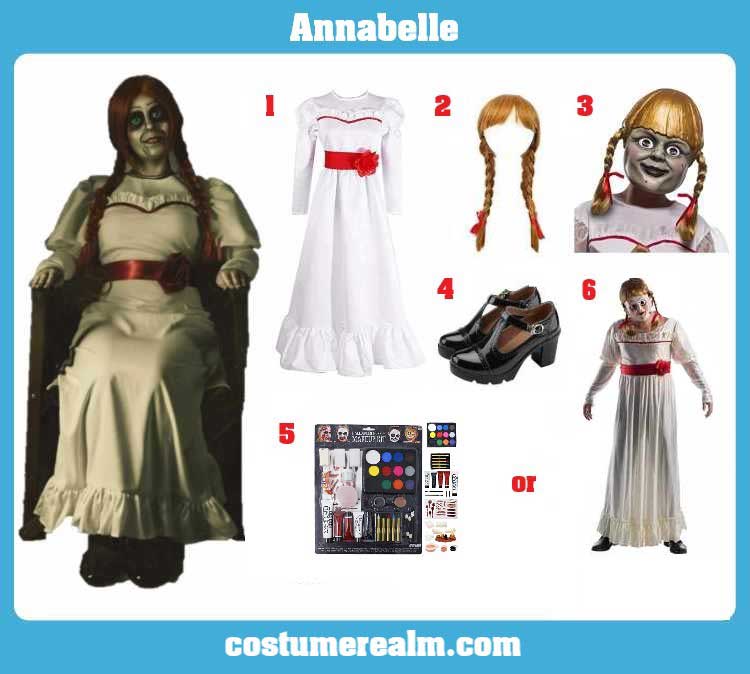 You need the following items for your Annabelle Halloween costume: 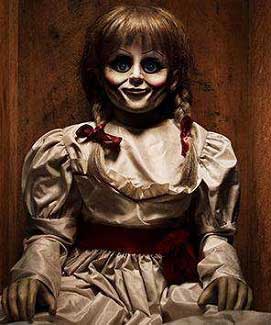 Annabelle Dress:  The dress is long and white. At the waist, there is a belt with 1 red rose. The sleeves are long and bubble-shaped. The bottom hem is pleated.

Annabelle Accessories: To fully complete your  Annabelle Halloween costume, you need an Annabelle wig with long brown double tails and Annabelle mask or Annabelle makeup. Finally, with a classic mid-heeled platform shoe with a T-strap and square toe for women. Your costume is fully completed. 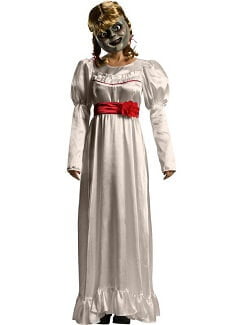 Annabelle is a disfigured and threatening porcelain doll. She walks, dragging her clothes to the ground, as her dress is too long. You can make her belt with a piece of red fabric. In the movie, Annabelle wears a white dress with red trim. She also wears a red ribbon on her hair. For shoes, I recommend a dark Oxford dress shoe. You can get a brown braided wig. You can make face whitening makeup or wear an Annabelle mask. Likewise, you can use red lipstick for lips. If you can also mimic Annabelle's gait, you can have an acclaimed Annabelle Costume.

Annabelle is a porcelain doll and is considered as the main rival in several films such as Annabelle, Annabelle: Creation, and Annabelle Come Home. According to films, the doll was first possessed after a seven-year-old girl named Annabelle Higgins died of premeditated murder, although the rumors say the doll has a real girl's spirit, many demonologists believe it is more likely to be an evil spirit or demon. As the franchise went on, Annabelle seemed more demonic and powerful after each horror movie.

That powerful demonic entity can exist independently, but most of the time attaches itself to a china doll to torment those who possess it. Ed and Lorraine Warren took during one of their cases. Regarded as their most dangerous and most persecuted subject is Annabelle. And Annabelle has a habit of moving unseen.