You need the following items for your Ash Williams Halloween costume:

How To Dress Like Ash Williams From Evil Dead 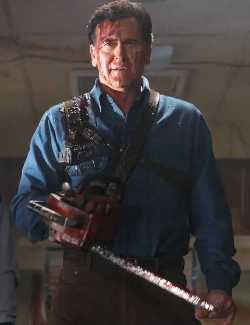 Ash Williams Costume: To get the look of Ash Williams from the famous Evil Dead series, which started as a low budget horror film in 1981, you will first need a denim shirt and brown carpenter pants.

Ash Williams Accessories: To complete your Ash Williams Halloween costume, don't forget Ash's holster harness, a toy, or prop chainsaw, a toy shotgun and black boots. You can optionally use some stage blood to show how badass you are.

Evil Dead Ash costume requires a lot of props, but you can easily find them at a local costume store. The most important item in this costume is the chainsaw, it is Ash's signature weapon with which he cut off his own hand. For the left hand, you can ideally you should equip with a toy shotgun which Ash calls "boomstick", however it is not that significant as the chainsaw as Ash tends to use lots of other weapons as well as axes, hammers, even shovels.

This is a great costume idea for those who love scary costumes yet never leave their sense of humor aside.  If you are going to the Halloween party with some friends, we have great costume ideas for you all! Check out Negan, Alpha or Beta from The Walking Dead, or Undead John Marston from Red Dead Redemption Undead Nightmare.

Ash Williams (Bruce Campbell )is the main antihero of the series "The Evil Dead".

Having first appeared in the 1981 film "The Evil Dead", Ash has become very popular in modern pop culture and one of the few non-monster characters in the horror genre who have gained such fame. However, he is most easily recognized and imagined in later materials based on his last appearance in the second film, armed with a sawed-off shotgun and a chainsaw tied to the stump on his right arm, where his hand once was.

Ash's personality changes dramatically throughout the franchise. In The Evil Dead and the beginning of The Evil  Dead 2 he is something of a laid-back philistine, cowardly and inexperienced, but by the middle of The Evil Dead 2 and Army of Darkness he has turned into a much braver, even arrogant man and becomes the voice of boost and confidence in Arthur's Castle. It is at this point that Ash becomes known for his one-sided statements, and his personality takes on a more cynical, embittered shade.