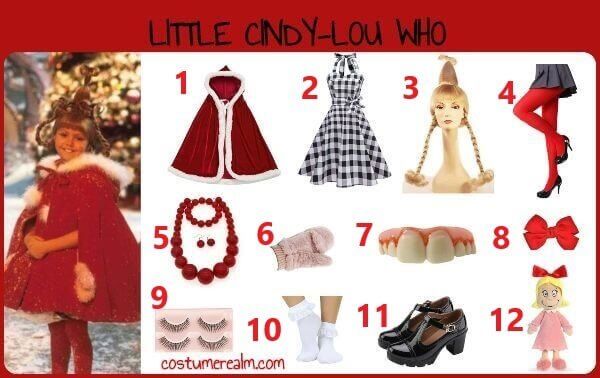 You need the following items for your Cindy Lou Who Christmas costume:

How To Dress Like Cindy Lou Who From The Grinch 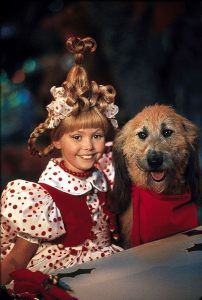 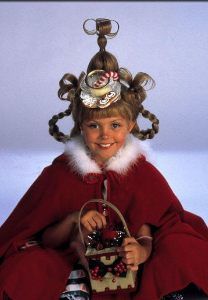 Cindy Lou, a cute young girl from Dr. Seuss' storybook How the Grinch Stole Christmas as a minor character and the films appeared in 2000 and 2018 as one of the main characters who acted as a Deuteragonist.

She was a two-year-old girl who lives in Whoville and plays a minor role in the story in the picture book.

Get some of your friends to dress up as The Grinch, Bad Santa, Mean Girls, Buddy the Elf, Cindy Lou Who, Kevin and Pigeon Lady from Home Alone, Ellen Griswold, Jack Skellington, Oogie Boogie, and Sally from The Nightmare Before Christmas for the best Christmas party ever.

Cindy Lou was about eight or ten years old and knows the Grinch at the beginning of the story, unlike her cartoon version. Thanks to her research on the Grinch, she saved her from the stamp.

Unlike the other Whos except for Martha, Cindy believes there is something good in the Grinch that is just a misunderstood creature and not mean.

Later, the Mayor of Whoville, Augustus May Who, grumpily accuses her of robbing everyone when the Whos wake up to have the Grinch search their homes.

However, her name is cleared shortly after her father intervenes, and she later helps the Grinch return an item to the Whos after sneaking aboard his sled by telling him that nobody should be alone at Christmas.

In the scene, she gave the Grinch a friendly kiss on the cheek after wishing him a Merry Christmas. They both sang and she finally greeted Grinch and Max in their family.