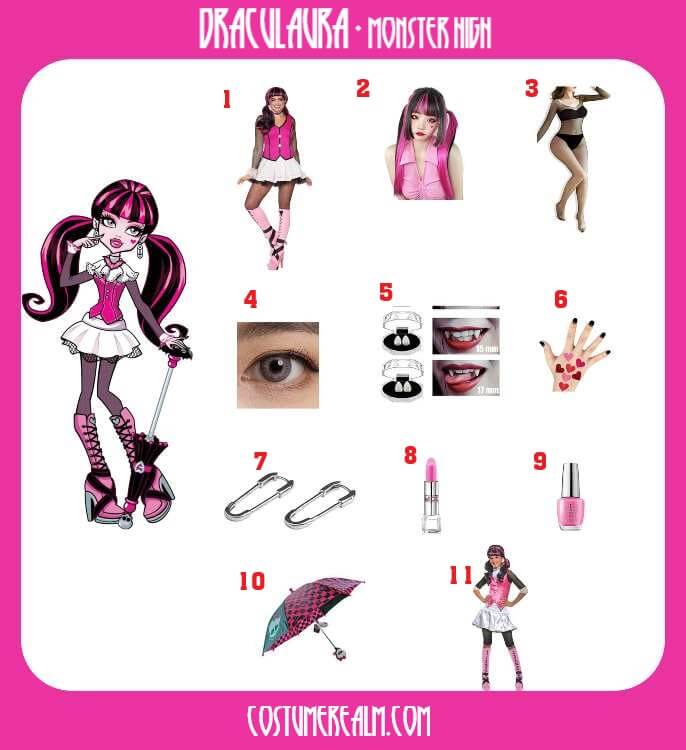 You need the following items for your Draculaura Halloween costume:

Draculaura is a character introduced in 2010 that is all-around. She is a student at Monster High, and she is the daughter of a vampire. As a child, Draculaura spent much time at the Vampire Court, which explains why she is used to being pampered.

Get the look of Draculaura by dressing up in a white mini skirt, a pink sleeveless vest, pink under the knee boots, and a fishnet bodysuit. 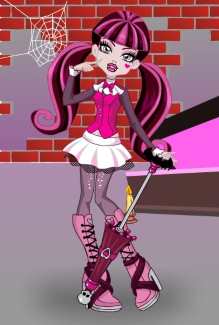 Draculaura Costume: Dracula's daughter, Draculaura, wears a lot of gothic black, but she loves to accent it with hints of bright pink. Her clothes are always interesting, and never boring, and they always have a touch of fun. If you want to DIY the costume, black bodysuits with a hot pink vest or skirt are good. Avoid blue, yellow, and other colors of the rainbow, and instead mix in a little purple and other shades of red and pink. Draculaura's tutu is her signature piece, and it's not hard to see why, it's adorable. Buy a tutu with plenty of bounce, preferably one with lace on the underside. If you don't have time, you can get her costume online or check your local costume shop.

Draculaura is a pale vampire with pale purple eyes, and long black hair. She can wear her hair in a variety of ways, from a single ponytail to hanging loose. She has a pale skin with a pink tint that's sensitive to the sun and many of her physical features nod to her vampire heritage. The small pink heart under her left eye is a scaredy-mouse, as was pointed out by Operetta in, Why Do Ghouls Fall in Love? The vampire fangs, hearts, ribbons and bows are her fashion motifs. She wears deep pink lipstick and a line of pink eyeshadow in the crease, as well as white safety pin earrings. Draculauras outfit starts with a pink vest with a white lace jabot and a pink flower necklace. Black mesh sleeves and lace cuffs finish the look. Her skirt has pink stitching, a white hem, and black leggings. The pink boots have black straps, laces, and heart accents. She has a black parasol with a Skullette tip and a bat handle.

Despite her childish side, Draculaura is angelic, energetic, amiable, delicate, and calm. One of her first friends was Frankie, and in New Ghoul @ School, she helped him realize that he might fit in. Even though she doesn't seem to care much about what other monsters think of her, she is a trend follower and a "gossip ghoul".

Draculaura is usually happy and easily distracted, so she's usually seen as naïve, but happiness rarely fades for Draculaura. She cries the easiest and is the most emotional of the girls. She is also shown to be flirtatious, having the most crushes out of the cast. She arranges her own food from her garden. Dracula will be overwhelmed by the sight of meat in front of her.