You need the following items for your Lord Farquaad Halloween costume: 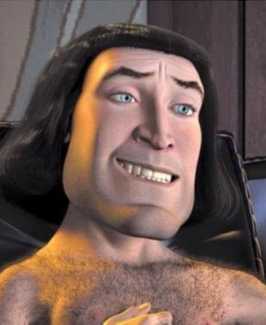 In Shrek, Farquaad had banished all of the fairytale creatures from his land, forcing them to take refuge in Shrek's swamp. Back at his castle, Farquaad tortured the Gingerbread Man into revealing the location of the other fairytale folk which he hasn't captured or banished yet. Just as Gingerbread Man was going to reveal what he knows, the Captain of the guards arrived and announced that they have found the Magic Mirror. Farquaad asked the mirror if Duloc was the most perfect kingdom of them all. The mirror told him that he's not truly a king yet, but he can become one if he marries a princess. 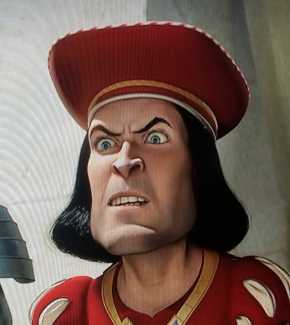 Lord Farquaad wears a predominantly red outfit with a red hat and cape that matches his red tunic. He has a big chin, a pageboy hairstyle, and is quite short.
Lord Farquaad is a tyrannical dictator who will do anything to become the true King of Duloc. He has no problem with Gingy being tortured and mutilated while he quietly watches as Thelonius dips Gingy into a glass of milk. He doesn't seem to care about the welfare of his people as he openly admits that he is risking the lives of all of his own knights to save Fiona so he doesn't have to. Although he thinks Fiona is beautiful, his decision to marry her is a lust for power. The full extent of his deafness is revealed towards the end of the film when he threatens to drag and drop Shrek and lock Fiona in her tower for the rest of her life.

His obsession with "perfection", his urge to be king, and his short stature show a man with severe self-image problems. Farquaad overcompensates for his short stature by being dominant and controlling. Other examples of this include the towering Duloc Castle, the numerous statues and murals of him around Duloc, and his tomb showing him above the dragon. When Gingy calls him a monster, Farquaad rejects this, claiming that the fairy tale creatures are monsters. Although he finds fairytale creatures a plague for his perfect world, he has no problem marrying a princess from a fairy tale to become king. And although he claims his goal is to make Duloc perfect, he doesn't see his own brevity as a problem for that perfect either.

Despite all these qualities, he remains true to his word, as evidenced by the fact that he has fulfilled the promise to return the deed to Shrek in his swamp once Shrek has given him Fiona. However, he was still very ungrateful, rude, never thanked Shrek or Donkey, and took all the credit for the rescue. Apparently, he is a competent administrator, and under his rule, the city of Duloc flourished. At the same time, he's not very popular with his citizens, as they quickly clap and cheer Shrek during the tournament and greet him again when he interrupts the wedding. They don't seem to care about Farquaad's death, some even laugh and cheer.