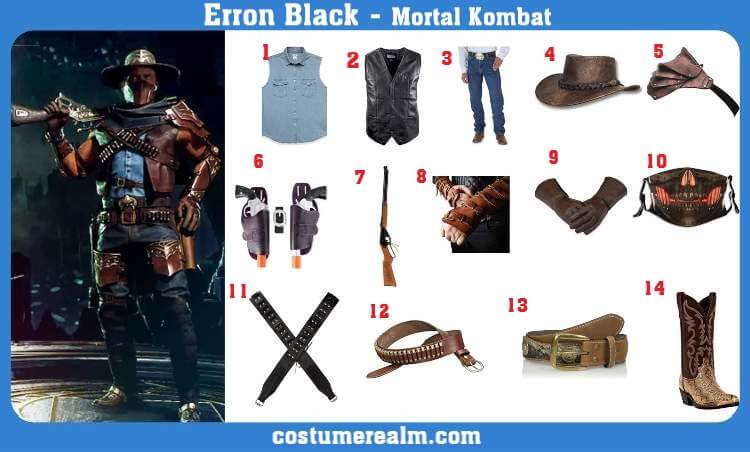 You need the following items for your Erron Black Halloween costume:

How To Dress Like Erron Black From Mortal Kombat 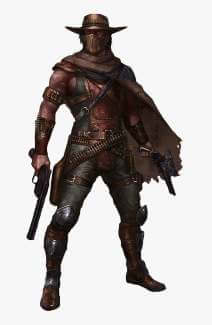 Erron Black's Costume: Mimicking the looks of the cowboys of the old west, Erron Black is depicted in black clothing beneath a brown leather vest, gloves and boots, and a mask that covers the lower half of his face. His Stetson hat barely covers his dark blond hair, and various bandoliers are wrapped around his waist, upper arms, and hat. Holsters for his sidearms are attached to his thighs.

Erron Black's Weapons: Erron's main weapons are his twin revolvers. He uses them to shoot the enemy from a distance or close up when he picks them up. They can also be used as makeshift melee weapons.
Erron's most powerful firearm is his rifle. This means that he can not only shoot the enemy from a great distance but can also use it as a melee weapon like his revolver. A single blow with the rifle is enough to behead someone. 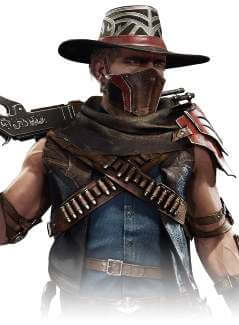 Erron Black is a character from the Mortal Kombat series. As a mercenary and former member of the Black Dragon, Erron is an Outlander close to the Outworld throne and serving whoever is the ruler of Outworld.

Erron Black is an Old West gunslinger who wears black clothing under a brown leather vest, gauntlets and boots, a poncho around his shoulders, and a mask that covers the lower half of his features. His Stetson hat barely covers his light brown hair, and various bandoliers are wrapped around his waist, upper arms, and hat. Holsters for his sidearms are attached to his thighs.

In MK11, it appears that his aged skin and scars on his body have been removed. In addition, unlike MKX, Erron's face is now visible depending on which facial cosmetic is chosen between bandanas, masks, or hats, or whether these accessories are completely removed. Plus, Erron now has a southern accent when speaking, something that was missing from his previous appearance on MKX.

In MK11 he got bugs by adapting different outfits to the game, as well as different equipment consisting of different headgear, lever rifles, and revolvers. First of all, Erron has two specific outfits for his past and present, both of which appear in story mode.

Erron's primary appearance is the current self, with a new outfit and new weapons compared to his appearance on MKX. Black has a lot more motifs from Western styles, with a leather vest, with fabric around the neck that hangs over the back like a cape that also has left shoulder protection. He also wears cowboy boots with leather straps with ball chains and a leather revolver holster. His clothing also has orange armored forearm guards and protects his thighs along with grenades, but he never uses them with a knife in his right boot holster. His mask and hut are completely different too, with a silver design on his hut instead of a ball chain, and his mask is made entirely of leather with brown and red colors. Unlike MKX, however, its revolvers are large steampunk-style revolvers with barrels and bright orange spots instead of the gold revolver. He also now carries a telescopic lever rifle, the second of two main weapons he uses during the game.
Erron's second outfit is the younger you from the past. Unlike his current counterpart, his outfit is not heavily influenced by the western motifs, with a black and red torso with black and blue pants and a black cowboy with white patterns on it. In addition, the weapons he uses and the mask he wears are identical to his current counterpart, the only difference being the color. His hat, however, is smaller and has a small chain of smaller balls that go around the hat.
Additional outfits have an outfit that resembles a matador, with a button vest and shoulder tassel. Another is a modified version of her younger self's clothing that turns the leather jacket into body armor. A fourth and final outfit is designed to resemble MKX's main clothing, with a lightly armored torso, with Black even being able to outfit his MKX mask and hat by customizing.