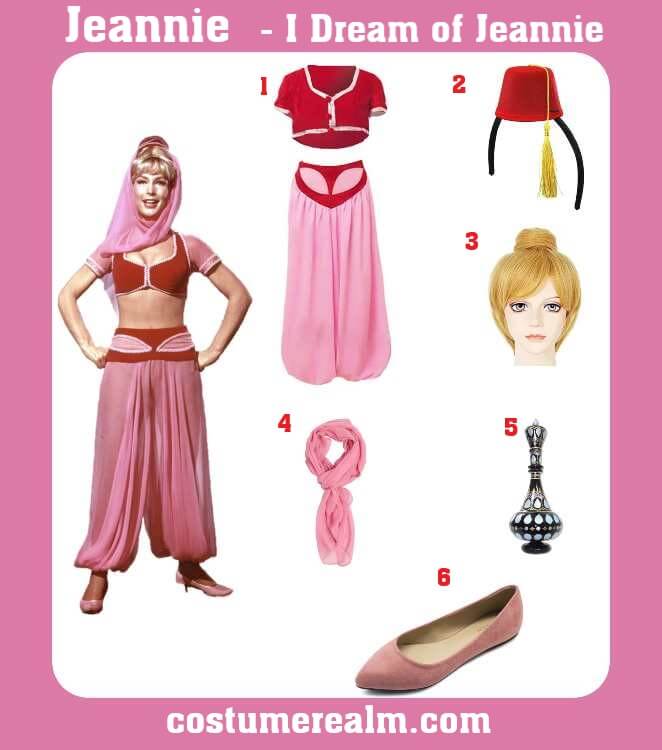 You will need the following items for your Jeannie Halloween costume:

If you want to dress like Jeannie, you will need her costume, a short blonde wig, a pink chiffon scarf, and flat pink shoes. You will be ready to impress at your next convention or Halloween party if you put together the pieces and recreate the iconic look.

How To Dress Like Jeannie From I Dream Of Jeannie 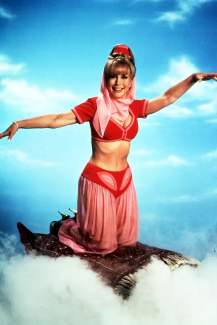 Jeannie Costume: Jeannie’s costume is very colorful. It is one of the most iconic costumes of all time. It is easy to cosplay the adorable genie in the I Dream of Jeannie costume.

Her pink bra top is exposed under her short-sleeved red vest. She wears red and pink together. This is visible in her pink harem pants that are made of chiffon. Get a red sash, and a pair of flat pink shoes to complete the look.

The color of her hair is blonde, and she wears a pink scarf and a red Ottoman style fez on top. You can get a short blonde wig and wear a pink scarf and a mini red fez. Finally, she lives in a bottle because she is a genie. She only comes out when she is called. Add a genie bottle prop to your costume for an extra flair.

Jeannie is tall and has white skin, rose lips, blue eyes, and blonde hair. Jeannie's outfit is made of pink silk. The first season was shot in black and white and Jeannie would wear silk shawls over her outfit during some earlier episodes, so the color was not known. The reason for the extra shawl is that the actress was pregnant at that time. Until the TV movie “I Dream of Jeannie: Fifteen Years Later”, Jeannie never showed her belly button Jeannie would always have a bead over her belly button. In the later season, other women would have shown their belly buttons, but Jeannie never did. When going to dinner with Tony, Jeannie would wear regular clothing. She wore regular clothing in Season 5 because she was trying to be a normal wife.

She is a genie, as her name suggests. Her eagerness to please has often led to her master's misfortune. Even though she's been alive for well over two thousand years, Jeannie has proven to be very immature and impulsive. She doesn't listen to her master and uses her powers whenever she wants to. Jeannie is overprotective because of her passion for her master.