You need the following items for your Juliet Halloween Costume;

This movie was released in 1996 and is a masterpiece in the eyes of its fans. Nowadays, we often see Romeo and Juliet costumes on Halloween. You can dress up as Romeo & Juliet with your partner, making your Halloween more fun and more romantic.

You can click the link for our Romeo costume guide; 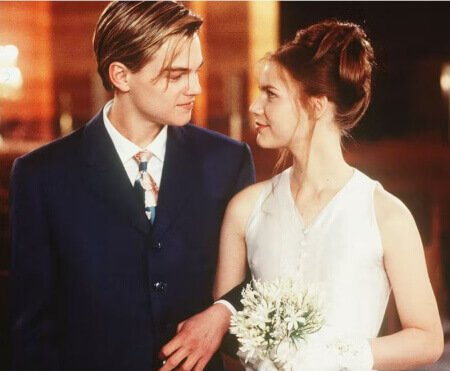 Juliet Costume: For your Juliet Halloween costume, you will need a white wrap dress and gladiator sandals.

Juliet Accessories: To complete your Juliet look, don't forget to get a silver cross, angel wings, a long curly hair cosplay wig and last but not least, nylon wig caps. Romeo Juliet They live in Verona and their families are hostile to each other. There is a fierce battle between the Montagues and the Capulets. It is said that if this situation ends, Prince Escalus will be executed if he tries to create chaos. Paris is a close relative of the Prince and tells Capulet, the Lord of Paris, that he wants to marry his daughter. Juliet tells Paris that she does not love her and punishes Prince Romeo in exile. Juliet finds the only solution to go to the priest, and after telling the priest what happened, the priest gives her a magic potion. After drinking this potion, he will not wake up for 2 days and people will recognize him as dead. Romeo will come and rescue him from the grave. Romeo manages to escape to save Juliet but is devastated when he hears of Juliet's death. Romeo wants to kiss Juliet's body for the last time and dies from the poison in Juliet's mouth. When Juliet wakes up, she sees Romeo dead and eventually commits suicide. Romeo and Juliet lines describe love in a very deep way.