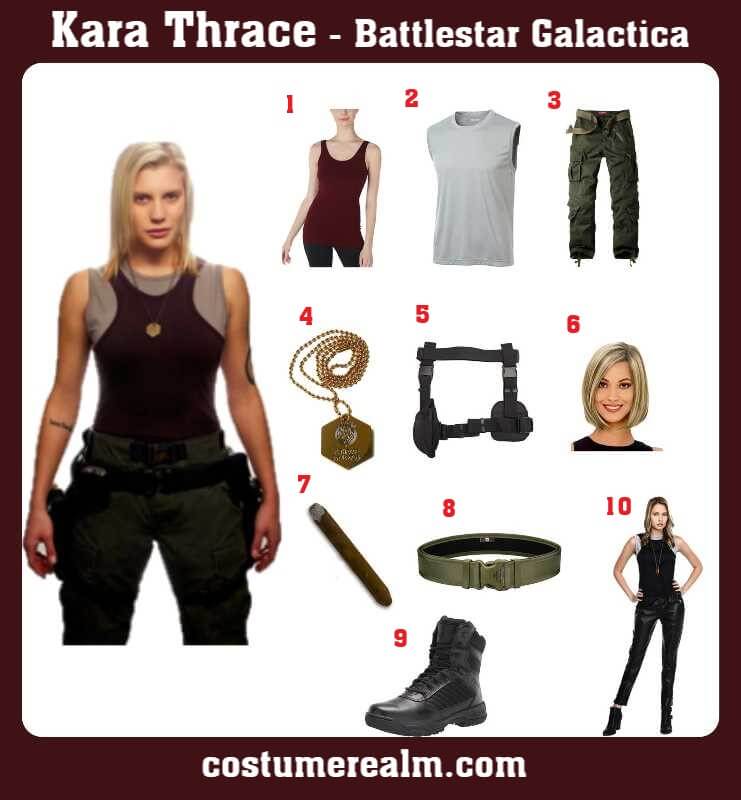 You need the following items for your Kara Thrace Halloween costume:

Kara Trace was one of the main characters of Battlestar Galactica and a Viper pilot. She was a very good pilot, however her behaviors were a blocking factor for her career most of the time.  Starbuck's role changed over the course of the series.

Get the look of Kara Thrace (Starbuck) with this Kara Thrace costume guide. Dress up in a burgundy tank top, and underneath it wear a silver sleeveless muscle shirt, Kara Thrace dog tag, black tactical boots, and of course a blonde short bob wig.

How To Dress Like Kara Thrace From Battlestar Galactica 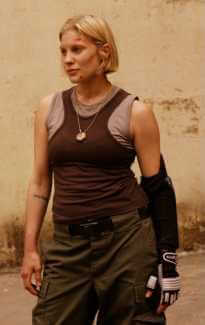 Starbuck Costume: Starbuck can fly small one-person planes, known as Vipers. She worked as a flight instructor before joining Commander William Adama's crew on Galaxy, and after the Cylon attack, she remains an invaluable pilot. But disregard being a soldier, she's usually not interested in following the patterns. Recreate the look of Starbuck by heading to a local retail store for a burgundy tank top, a sleeveless muscle shirt, army green cargo pants, and black tactical boots. Check a costume shop for a fake cigar and Kara's dog tag.

Kara loves liquor, cigars, card games and spiritualism. Starbuck is as lawless as it seems. She can often be found chewing cigars,  drinking, betting in card games or competing in a Pyramid – a game she played almost professionally. But Starbuck also has a hidden spiritual side. She frequently prays to the Kobol Gods when she has no company. She is brash, battleful, rivalrous, spontaneous and strong – both physically and mentally.  She's had a hard life, and she's just as likely to blow off steam with a punch as with a joke. Although her confidence and instincts make her an excellent pilot, all this bluster can also prevent her from getting close to people.