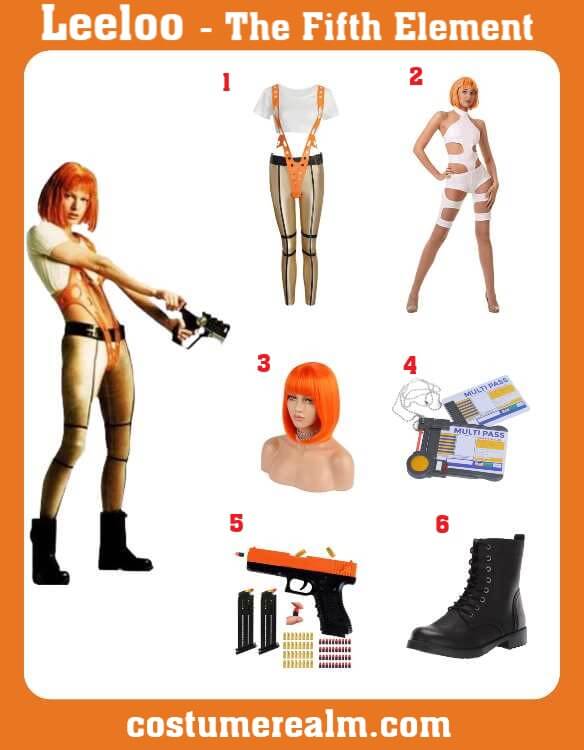 You need the following items for your Leeloo Halloween costume:

One of the Supreme Beings of the Universe is Leeloo (Full Name:  Leeloominaï Lekatariba Lamina-Tchaï Ekbat De Sebat).  In corporeal form, she was sent to Earth to become the Fifth Element, the final piece of a powerful weapon to defeat the Great Evil.

How To Dress Like Leeloo From The Fifth Element 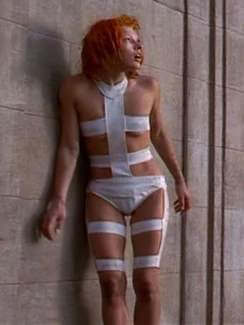 Leeloo Costume:  Her orange harness and orange hair are two pieces that stand out when putting together your Leeloo costume.  Regarding her outfit, you should start a pair of gold leggings and a white cropped t-shirt to wear underneath the harness.  Her orange hair is as iconic as her harness, maybe even more. You should ensure that you get an orange short bob wig with bangs. Complete your look with a pair of black combat boots. If anyone questions you, you can show your multipass replica.

After being made into a human form, Leeloo looks like a Caucasian female in her mid-to-late twenties. According to Korben, she is a really big fare that he couldn't resist, being 5'9”, having long legs, blue eyes, and great skin. She has bright orange bob hair with bangs. David mentioned that she is physically perfect and fair-skinned when she stripped nude in front of him.

Leeloo is clothed by the scientists in white thermal bandages that conceal her nudity after her laboratory birth. David helps her by giving clothes and a box that applies makeup to the eyes. Among the clothes she wears are combat boots, gold leggings with a fishnet pattern, a white crop top and orange suspenders. She also wears eye makeup, using the cosmetic box David provided.

Leeloo's appearance before the accident with the Mondoshawans is not known. She is honest and direct in her words and actions. The violence Leeloo sees while viewing clips and pictures of human wars shocked and made her sorrowful. During the Diva's operatic performance, she has flashbacks of the night she and the Mondoshawans were attacked, and she quickly becomes angry. She also becomes depressed and doesn't want to finish her mission. She says, “What's the point of saving life when you see what you do to it?” This refers to the death and violence humans seem to be willing to do to others. However, when Korben confessed his love for her, she seemed happy and overwhelmed with emotion.