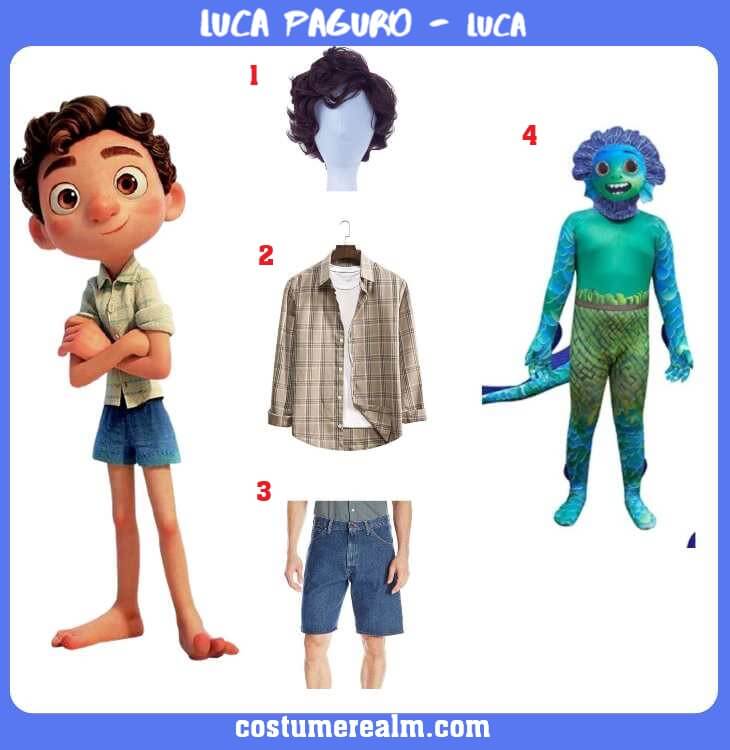 You need the following items for your Luca Halloween costume:

How To Dress Like Luca Paguro From Disney's Luca 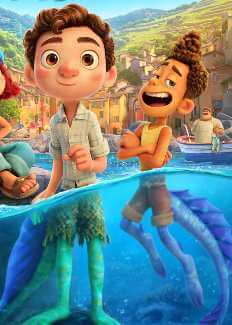 Luca's Outfit: In human form, Luca wears a button-down shirt and he rolls its sleeves up to his elbow and denim shorts. He never wears shoes.

Luca's Sea Monster Costume: Luca has blue-green scales, blue "hair" and sharp teeth. His eyes have the same color, but they have pale yellow dermis and oval pupils. Lucas also has a long tail with smooth blue caudal fins.

Luca Paguro is one of the main characters in Disney's animated film Luca. He is a sea monster influenced by Alberto who dares to rise to the surface. When he learns that his parents are sending him away from the surface, he and Alberto flee to the Italian city of Portorosso and take part in the Portorosso Cup to buy a Vespa together and explore the world.

In human form, Luca is slim with fair skin, rosy cheeks, brown eyes, and wavy, dark brown hair. He wears a blue and green striped ivory button-down shirt with rolled-up sleeves, blue shorts and is barefoot all the time.

In the shape of a sea monster, Luca has blue-green scales, sharp teeth, and blue hair. His eyes are still brown, but they have pale yellow dermis and oval pupils. It also has a long tail with smooth blue caudal fins. Before Luca gets his new outfits, you can see him in green algae pants.

Luca starts out as a very shy and shy, but curious and resourceful character. He is afraid of the surface but is also very curious about it. He meets Alberto, whom Luca thinks is a human diver, but who turns out to be a sea monster. After Alberto brings him to the surface, Luca confidently tries to refuse to stay there, considering himself a "good kid". When he is given the opportunity to approach the surface shortly afterward, his first reaction is that he disobeys his parents' orders and sees Alberto again.

As the film progresses, Luca is able to expand his curiosity about human life and what was on the surface, while Alberto also shows him his collection of human objects. Alberto can teach Luca to ignore his doubts and get out of his comfort zone, and that's how he learned his skills on a bike that he needs for the Portorosso Cup. He credits Alberto for teaching him how to be crazy.

Luca was also a very kind-hearted person who was ready to face anyone who threatened to harm his friends. Luca also had a strong desire to see the world above the surface, even though his parents had forbidden him to. Luca was very fascinated by learning new things that he enjoyed doing during his stay in Portorosso and was very excited when he learned something new.