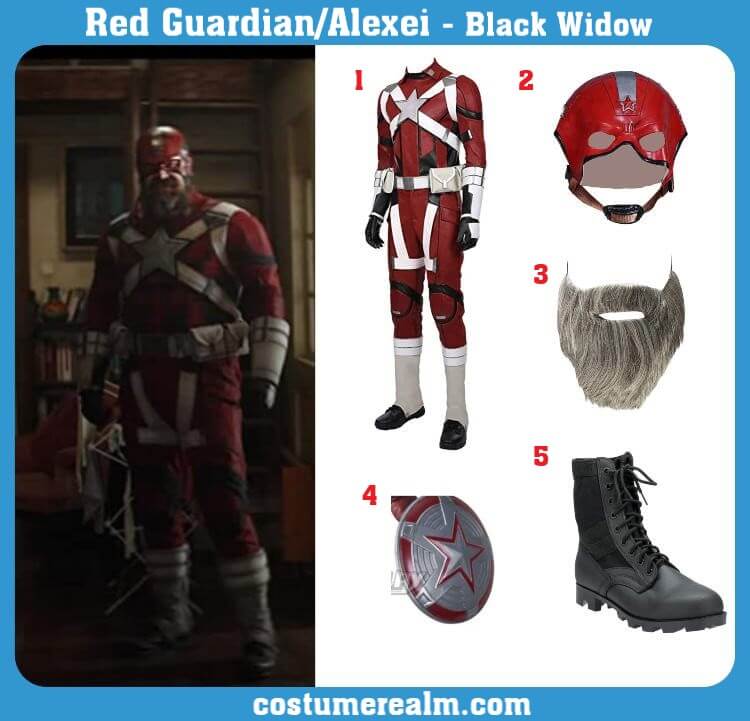 You need the following items for your Red Guardian / Alexei Halloween costume:

How To Dress Like Red Guardian/Alexei From Black Widow 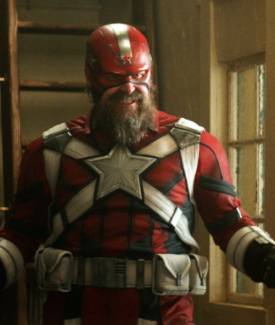 Red Guardian/Alexei Costume: Because he is a Russian superhero, we couldn't think of him wearing a different color costume than red. His costume is mainly red with white lines and a white star on the chest. The costume has a white utility belt and white shoe cover.

Red Guardian/Alexei Accessories: To complete your Red Guardian Halloween costume don't forget a replica of his shield, black combat boots, and a fake beard if you don't wear a beard yourself. 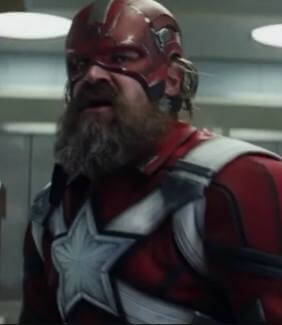 Alexei aka Red Guardian is the first Russian super-soldier. During his career in the Soviet armed forces, Shostakov became an ally of General Dreykov, head of the Red Room. In 1992, after the dissolution of the Soviet Union, he was sent undercover to Ohio to infiltrate and destroy the HYDRA-occupied Northern Institute at SHIELD, Belova. After the institute was destroyed in 1995, Shostakov returned home but was eventually detained by Dreykov in the Seventh District Prison for criticizing the Russian government.

Alexei is a kind, happy, and overall good man and loving father, albeit with some flaws that hinder his relationships. He loves Natasha and Yelena very much as his daughters and was very happy to see them again after 21 years, even though their names were tattooed in Cyrillic on his right arm. However, his longing for his glory days leads Yelena to believe that he never looked after her and sees her as a simple burden of a task, which is not true. Shostakov holds a grudge for being bitter towards Dreykov for imprisoning him, believing Dreykov wrongly did so because of a derogatory remark. Alexi has strong patriotism and national pride towards the Soviet Union as he proudly declares that he was the first and only super soldier in the Soviet Union. This patriotism led him to a one-sided rivalry with his American counterpart Steve Rogers, although Rogers knew neither of Shostakov nor of his existence. Alexei makes a sensational appearance while indulging in his fame as the Red Guardian. This was only made worse by his time in jail as his depression deepened, leading him to invent unlikely war stories about the battle against Captain America.

Although he initially protested that he had no affection for his undercover daughters, Shostakov had a tattoo of two roses, Natasha and Yelena, tied around his arm with a ribbon.