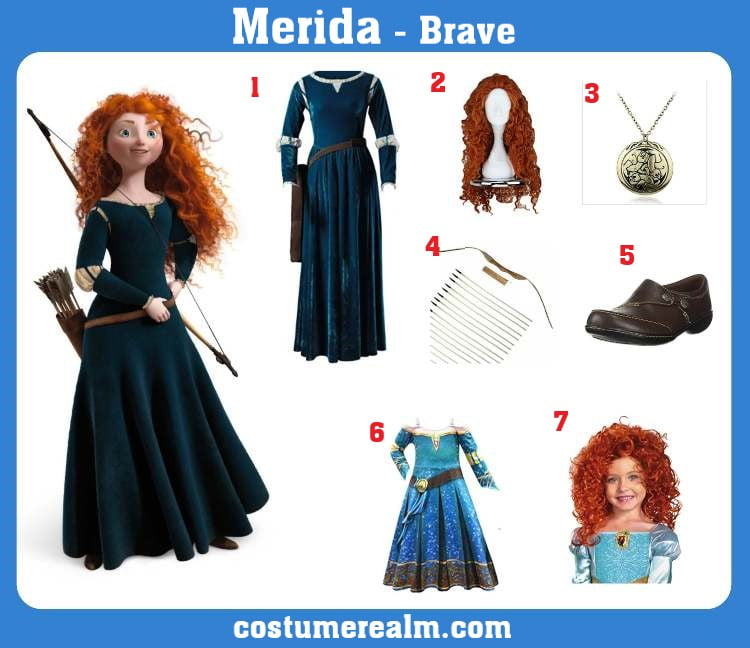 You need the following items for your Merida Halloween costume: 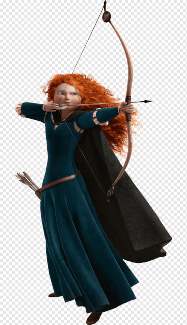 Merida's Dress: Merida wears a sheer turquoise dress with gold trim and a square neckline, as well as a white headdress and gold tiara to keep her hair in place. Finally, she tears the dress lightly to get more movement and the correct pose while holding a bow and arrow.

Princess Merida is the protagonist of Brave. She is a Scottish princess from the Kingdom of DunBroch, the daughter of Queen Elinor and King Fergus, and the older sister of Harris, Hubert, and Hamish. Brave and fearlessly, Merida challenged the longstanding traditions of her kingdom to lead a life of independence.

Merida has pale skin, a slim body, a round face, light freckles, long red curly hair, and blue eyes. At the beginning of the film, Merida was seen in a dark blue and green cotton dress that exposed parts of her underwear on the back and sleeves. To top it off, Merida wears a sheer turquoise dress with gold trim and a square neckline, as well as a white headdress and gold tiara to keep her hair in place. Finally, she tears the dress lightly to get more movement in her body and the correct pose while holding a bow and arrow.

Merida is a very brave, courageous, daring, stubborn, rebellious, and headstrong girl who does not fit into the stereotypical princess role. Rather than being a virgin in need, submitting to the customs, traditions and social restrictions that her society imposes on her, and expecting her to follow, Merida openly rebels, defying her legacy as a princess and wanting nothing more than to be a normal girl. She is very athletic and enjoys nothing more than riding her horse Angus and practicing her archery, of which she is the best in the kingdom. She also seems to be skilled in sword fighting, as shown in the Brave featurette "Cutting the Class". Merida tends to be rude, has bad manners, and is extremely boyish.

In terms of personality, she is very similar and very similar to her father as the two of them tend to be unruly, impulsive, and loud. However, she also resembles her mother in terms of stubbornness and inability to listen to others.

When Merida was younger, she had a close relationship with her mother and father. She showed a curious side as she followed the will-o'-the-wisps, although she had to get back on track and seemed to believe in the legends and myths of her kingdom, which underscored her innocence and naivete. She also tended to be playful, as evidenced by her hiding place with her mother, and was very hyperactive. Merida is also shown to have developed an interest in archery early in her childhood, possibly through her father's influence.