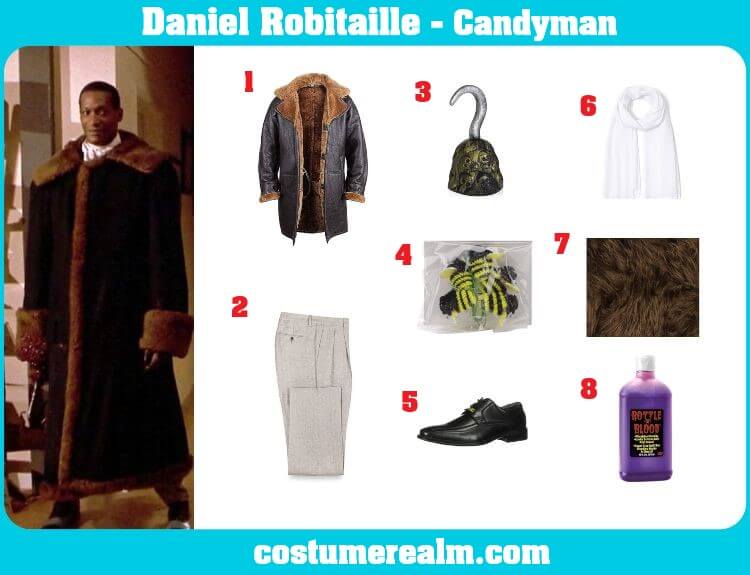 You need the following items for your Candyman Halloween costume: 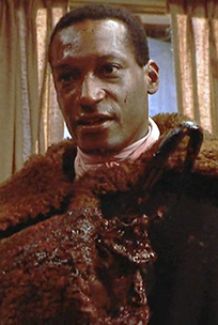 Daniel Robitaille, mostly known as Candyman. Candyman takes the form of a slim and really tall African American man, six feet tall, who slightly eclipses all other characters in the Candyman films. His attire consists of a large, brown fur trench coat, a white tie around his neck, gray pants, a pair of polished leather shoes, and a bloody hook for his right hand, which he uses to mutilate his victims. His trench coat is used to hide his grotesque mutilations, which are the result of the torture he endured just before his death. Seen below are Candyman's skinless rib cage and hollowed-out abdomen, as well as his internal organs infested by the many bees that live inside him. His hair is jet black and curly but kept very short. 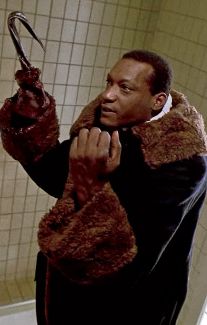 Daniel Robitaille, better known as Candyman, is the eponymous main antagonist of the Candyman franchise, based on the short story "The Forbidden" from the anthology Books of Blood by Clive Barker.
Despite his nature as a brutal killer and vengeful ghost, Candyman has a particularly tragic past compared to most horror icons, which arguably made him more likable while still being just as menacing and deadly as any other slasher movie villain. He returns in the 2021 film of the same name. As with Clive Barker's previous slasher icon, Pinhead, Candyman's character was intentionally designed to be highly charismatic and articulate, with his main source of angst stemming from his warped sense of reasoning. He is portrayed by Tony Todd throughout the series

Candyman rose from the grave and became an angry specter that haunted the country where he was executed. But rather than leaving the Cabrini-Green land or the Sullivan household uninhabited, Candyman preferred to keep the residents in the dark and unaware of its existence until they made the mistake of conjuring it up. Candyman, although well-spoken and articulate, is portrayed as incredibly self-absorbed, narcissistic, and vain who values ​​his reputation over human life. His only motivation is to keep the rumors and stories surrounding his death alive, as he believes the longer people talk and fear him, the more he will haunt the land - which later turns out to be true.

Candyman is also known to severe God complex. He implies self-ubiquity by identifying himself with the rumors and images based on his name and likeness, further asserting that he is "nothing" without such things, and making it clear that he enjoys when people talk about him to listen. Candyman takes his role as God to literally religious lengths. He refers to the inhabitants of his tombs as his "followers" and "congregation". Also, Candyman doesn't kill his believers when they give up their belief in him; Instead, he decides to murder the people who called him superstitious.

It is also noted that in the second film his bloodlust and arrogance seem to hide his inner anguish at being denied the right to be with the woman he loves and the anxiety he feels at having the child gets what he has can never hold it or see it and caroline made it together. His features twist with obvious pain as he tells his story, his memories of Caroline are clearly something he holds dear. The fact that her sad face as she saw the atrocities being committed against him was the last thing he saw, and the knowledge that her pain was greater than he was burned into his memory showed how much they had meant to each other; when she saw his face in the mirror she held after his last breath, she did not throw the mirror away out of fear; she held it tight to her chest and sobbed at the loss of her love.