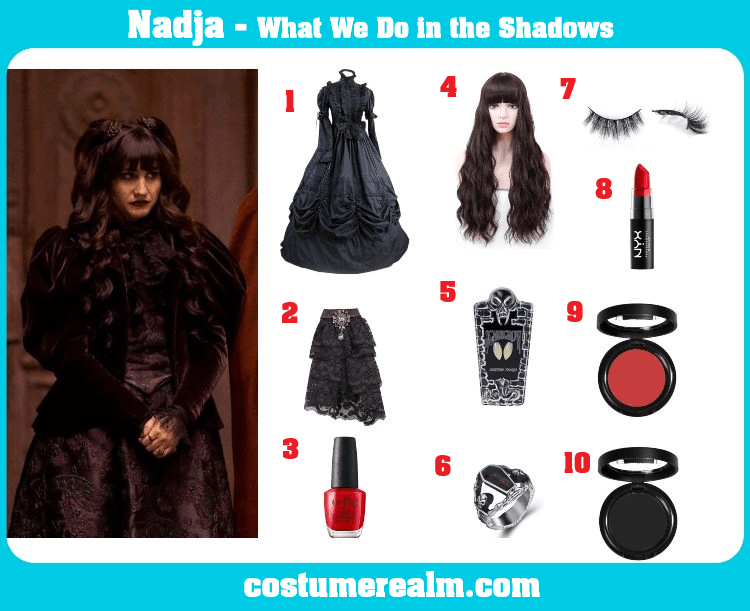 You need the following items for your Nadja Halloween costume: 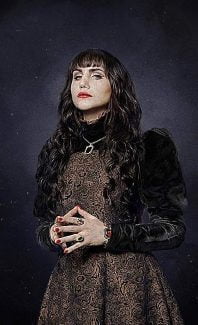 Dress like Nadja from What We Do in the Shadows;

Nadja's Outfits: As a vampire, Nadja wears mainly dark colors, with dramatic long sleeves, corsage details, and long skirts. She has hints of color sometimes but remains above all on the scale of gothic, vampiric colors. You can use a gothic-style Victorian black dress. The more laces and frills, the better.

Nadja's Make Up: Nadja's makeup is pretty much straightforward, you just need red and black as your main color. 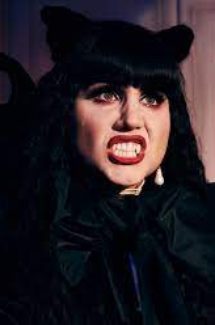 Nadja was very unlucky during her human life. Her village on a "beautiful" island with a high snake population was once a utopia but was burned down by an unknown army of warriors about 200 years before she was born. Only the "stupidest" people were spared and the village never recovered, leaving its residents badly hit by hunger and poverty.

Nadja's family was very poor and had to burn donkey dung and donkeys for heating. When Nadja was little, her mother was eaten by a bear; Her dying cries were allegedly absorbed by the jade necklace she had given Nadja shortly before. One night, while singing to the snakes, Baron Afanas in the form of a snake suddenly bit Nadja's neck and turned her into a vampire. Nadja was then expelled from the island by her villagers, which included her family.

After becoming a vampire, she gained many lovers, most of whom were reincarnations of Gregor, a man (and sometimes a woman, mouse, or horse) who lived various lives, but always died by decapitation because of him once the head was cut off a moment of passion.

She had a relationship with Baron Afanas, a feral member of the Elder Vampire Kingdom. The Baron was a good lover, but he ordered her to take over the new world while she was climaxing, which confused her a little.

One night Nadja flew into the window of the Laszlo Cravensworth, drank his blood. She also turned him into a vampire. The two eventually married. Around 1861, the couple was expelled from Europe due to anti-vampire prejudice. They were shipped to the United States along with fellow vampire Simon the Devious, with whom Nadja was most likely having an affair. Laszlo brought his witch skin hat, which Nadja increasingly resented as the hat was obviously cursed. She tried several times to throw the hat away, but it literally kept crawling back.

Nadja was once good friends with a witch named Lilith, but they fell out after Lilith slept with Laszlo. The incident caused Nadja to develop a serious hatred of witches.

Nadja Laszlo was a musical duo in the 18th and 19th centuries and helped compose a number of songs that were later reinterpreted into other popular songs in the 20th century. Examples of their collaboration include a "Seafaring Song" composed in 1792, which later became The Beach Boys' "Kokomo" and the Spice Girls' "Wannabe".