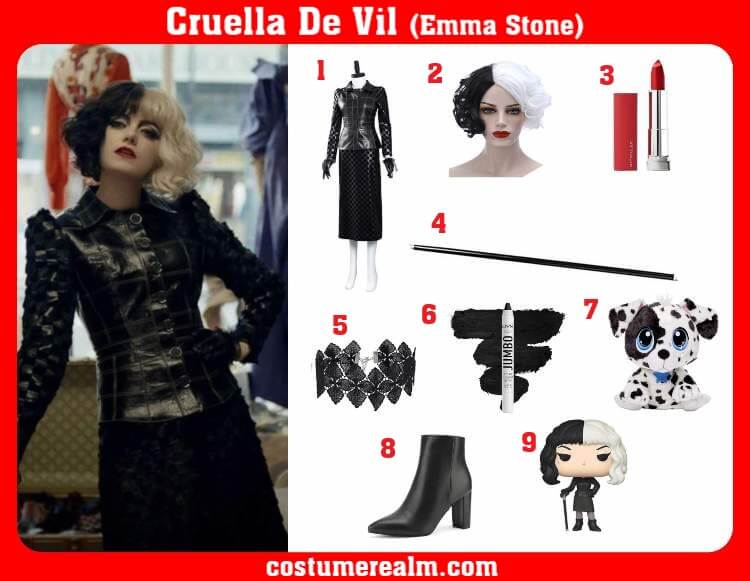 How To Dress Like Cruella De Vil ( Emma Stone) 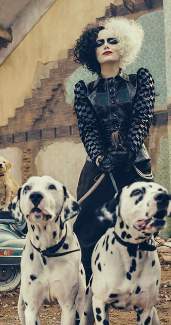 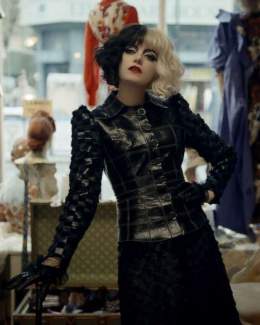 Cruella De Vil is the main character in the black comedy Cruella 2021.

She is a young up-and-coming fashion designer who seeks revenge on her birth mother, Baroness von Hellman, for the death of her adoptive mother Catherine. It is an adaptation of the character of the same name from Disney's 101 Dalmations. She was portrayed by Emma Stone.

Estella was a slim and tall woman with beautiful features and green eyes. Her skin was very pale and that was evident when she hugged herself completely as Cruella through her eye-catching and eye-catching makeup, preferring the colors black, white and red. As an Estella, she sometimes wore glasses, although without them she seemed to have good eyesight.

As Estella and Cruella, she had a keen eye for fashion and almost always wore incredibly extravagant, distinctive, and eye-catching outfits with the usual black, white, and red motifs. During the course of the film, she wears 47 different outfits.

Estella was born with black and white hair split in half and held that position for most of her childhood until she met Jasper and Horace when she decided to dye her hair red to differentiate herself from her original identity distance. When she took on the role of Cruella, she decided to allow her hair to return to its natural black and white form.

In her childhood, Estella was initially tough, aggressive, and confident, not afraid to speak her mind or defend herself, but after her mother's death and a desire to move on, Estella became rather meek, shy, and passive in her youth, though she still had an unmistakable intelligence. As the film progresses and as she learns more about what really happened to her adoptive mother, Estella becomes more confident and self-confident again and she assumes the identity of Cruella De Vil.
As Cruella, she was sadistic and ruthless, but also quite playful and eccentric, with an exaggerated manner of speaking, and became much bossy and rude than before. Ultimately, she was driven out of a desire for vengeance, and although upset at learning of her true inheritance and her adoptive mother's deception, she gave in out of love for her and still targeted her birth mother, the baroness I was was, as the film progressed, their resentments and hatreds grew. Although quite unstable, Cruella was a very intelligent, creative, pragmatic, and quick-thinking person who, thanks to her cleverness, managed to stay one step ahead of the Baroness for most of the film.

Despite her negative qualities, Cruella still had more redeeming qualities than any other version of her. She really did care about Jasper and Horace and considered them their closest companions and only family. She has also managed to maintain multiple friendships and get along well with others like Artie, Anita, and ultimately John when she learns of his true intentions.