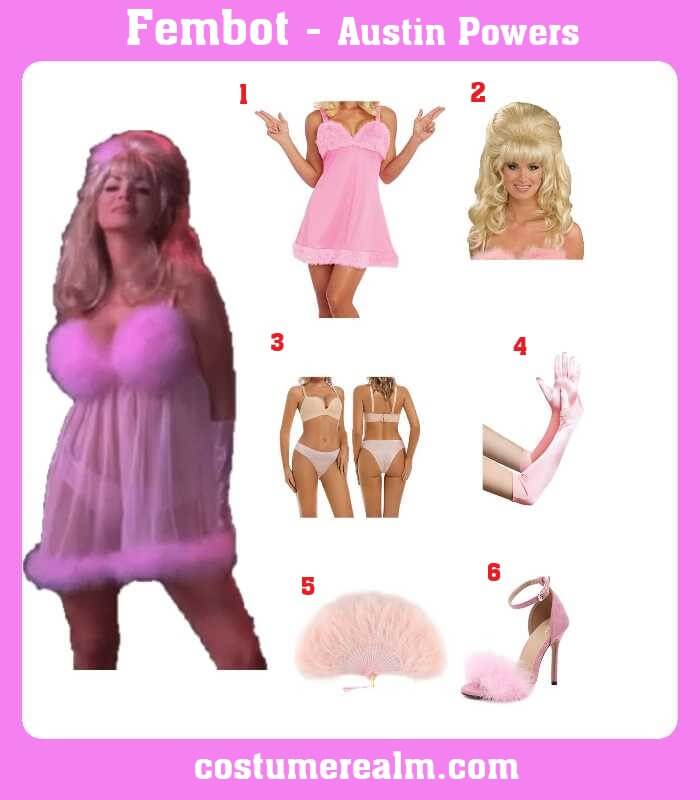 You need the following items for your Fembot Halloween costume:

Fembots are beautiful women dressed in sexy outfits and fighting with weapons hidden in their chests that can shoot bullets or spray aphrodisiac gas, whichever is needed. They look like women who have wide proportions to attract their prey, being very leggy, with lush breasts and lush hairstyles that both emphasize their glamorous appearance and hide their technological nodes.

To cosplay Fembot, dress up in a pink baby doll with pink fluffy feathers on the breast area, a fembot wig, long opera gloves, and pink high heels.

Fembot's look won't look complete without Austin Powers, or if you are up for a group cosplay, get your friends to dress up as Vanessa Kensington, Dr. Evil and Foxy Cleopatra to complete the gang.

Fembot Costume: There is a low chance that you already have most of the items required for Fembot Halloween costume, but don't worry, it is a great costume idea for the ones that want to make most use of their money as most of the items for this look can be used later in your daily life. For the Fembot look, head to a retail store for a pink babydoll with fluffy feathers on the breast area, a pink bikini bottom, and opera gloves, look online for Fembot wig.

At the initial stage of testing, the fembots were presented on pedestals in a simple room decorated with stones and lights, in outfits consisting of silver hot pants and bras with straps covered with grommets, as well as white gloves and Go-Go boots. After activation, sexually pacing from the pedestals of the platforms, the fembots easily seduced and fatally dealt with a squad of five armed guards using firearms hidden in their large breasts, after they fell under their spell, just silently giving them a smoldering look and subtle, seductive movements.
Later, Austin Powers enters the boardroom through the door of the Seabass pool, but discovers that the room is unfurnished, and the lights are dimmed when the fireplace turns to show the Fembots in their lair, now stylized as a girlish pink boudoir bathed in psychedelic light, along with a central bed. Which, along with the Fembots' new innocent but suggestive fluffy pink pajamas, serves as their main trap for detaining Austin. 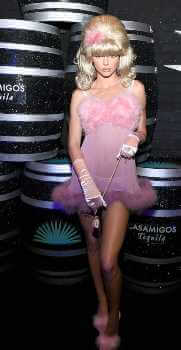 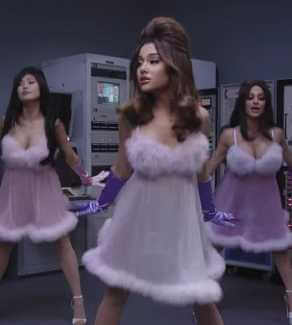