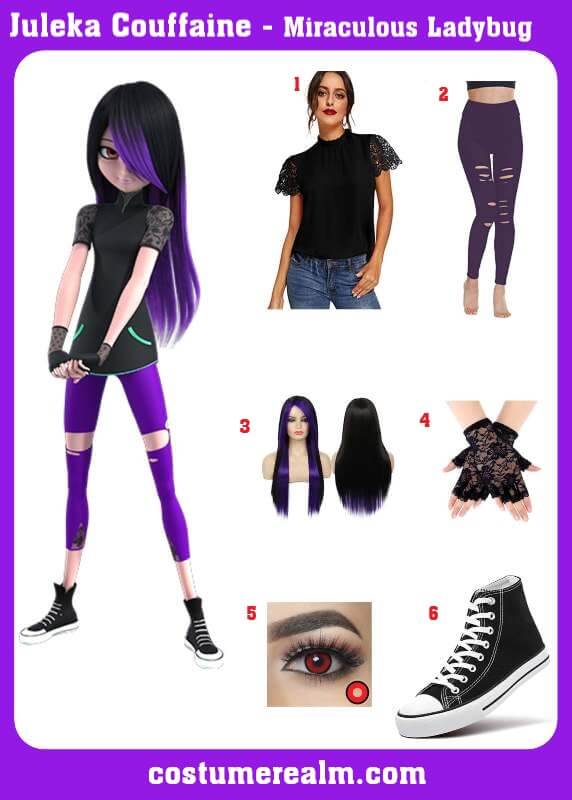 You need the following items for your Juleka Couffaine Halloween costume: 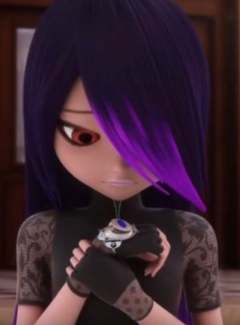 Juleka Couffaine Costume: For your Juleka Halloween costume you will need a blouse with short lace sleeves and ripped purple leggings. 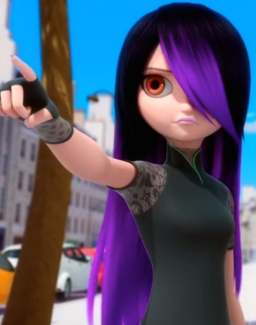 Juleka is a skinny teen girl with pale skin. She is of medium height. She has red eyes with black eyeshadow and black and purple hip-length hair, and bangs. She uses light purple-gray lipstick, and her nails are painted in a light sapphire-bluish-gray color with black nail art with intricate patterns on each with a different pattern on each hand.

Juleka wears a black turtleneck, a swan-neck T-shirt, a dark blue lined collar, side pockets, and black mesh sleeves. She also wears purple ripped leggings with slits above the knees and black high-top sneakers with white soles. She wears blue-purple black lace fingerless gloves with a diamond pattern; the right ends halfway to the forearm, and the left is slightly shorter compared to the right.

Juleka is a discreet and rather reserved girl. She hardly speaks and seems to have difficulty expressing her emotions. When the opportunity arises to start a discussion, the latter responds briefly in a small voice or moves his head to acquiesce or not. But sometimes, the shy girl can clearly express her opinion or her desire, as in Chronogirl where she is fed up with the challenges between Alix and Kim. She seems to like the usually scary things, finding the Horrificator "cool". She is worried and somewhat distressed in front of the lens of a camera because she never managed to get her picture taken properly until the Reflekta episode, which makes her believe that she is cursed with the photos.

As Reflekta, she mainly seeks revenge on Chloe and to show her presence in the world. Since no one has ever really paid attention to it, its power allows it to never go unnoticed in the eyes of everyone again. She is rather clever by transforming and sending André Bourgeois in his place to trap Ladybug or by changing Chat Noir before he can use his Cataclysm, but she is also thoughtless by not anticipating the transformation of Chat Noir will make his Miraculous disappear.