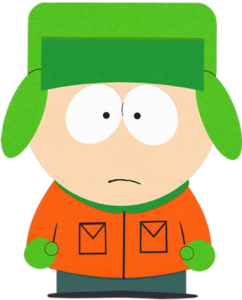 Kyle Broflovski is alongside Stan Marsh, Eric Cartman and Kenny McCormick one of the main characters of South Park. Kyle's family is the only Jewish family in South Park. He is often known for being Jewish, as well as his intelligence.

Kyle wears a greenish Ushanka, a bright orange jacket, dark green trousers, and bright green mittens. Kyle weighs 83 pounds. as stated in "HUMANCENTiPAD". Under his hat he has red hair, similar to his mother. This was first shown in "How to Eat With the Butt". he is out of hat in "Lil 'Crime Stoppers", "South Park is Gay", "Quest for Ratings", "Mr. Garrison's Fancy New Vagina", "The Losing Edge", "Elementary school Musical", " WTF "," it is a Jersey issue "and the Coon and Friends Bow (as his vigilantes friend, human kite). His hair is an allusion to Matt Stone's (his creator) old hairstyle as well as his character in "Cannibal! The Musical," who also wore a Ushanka. In "Good Times with Weapons" he is portrayed as a brown-eyed ninja.

He appeared in episodes other than his outfits, such as in "Margaritaville," when Randy advised residents to wear sheets rather than plain clothes (and ride lamas, among others) to appease the anger of the economy Kyle wore a red bed sheet in the form of a robe. He has also stylishly changed his Jewfro on several occasions, as in "South Park is Gay!" Shown. (as he briefly followed the metrosexual fashion), "Quest for Ratings" (in an exaggerated

Anchorman hood), "Elementary School Musical" (in the style of Corbin Bleu), and "It's a Jersey Thing" (when he "transformed") In "Free Willzyx" a photorealistic image of him (along with the other boys) drawn by the police, his mother Sheila notes that it is "a kind of bad drawing".

In The List, Kyle was voted the ugliest boy in the class by the 16 students who attended the class. This shakes Kyle's self-confidence. He leans over to the ugly outsider children in the school (who are so ugly he still stands out) who are constantly talking about burning the school. Eventually, Stan and Wendy Kyle said the list was the result of a corrupt compromise just before Kyle set fire to the school, freeing Kyle from his status as the ugliest child.
In the original Christmas short, Kyle's appearance looked drastically different: Instead of his orange jacket, he wore a green jacket and instead of a Ushanka he wore a yellow baseball cap and looked very similar to Stan.