Kenneth "Kenny" McCormick, voiced by Matt Stone, is one of South Park's 4 main characters. It was created by Trey Parker and Matt Stone and appeared for the first time in 1992 and 1995 in the short films "The Spirit of Christmas".  Mike Judge voiced him in the feature film "South Park: Bigger, Longer & Uncut" and Eric Stough in the episodes "The Jeffersons", "Lice Capades" and "Mysterion Rises". Kenny is best known for having died in almost every episode in the first five seasons of South Park.

He is also easily recognizable because he almost always wears an orange parka (or only hides his face), covering most of his face and muffling his speech. In the episode "Mysterion Rises," Kenny, who turns out to be a superhero Mysterion, reveals that he has the power to never die and wakes up in bed after some time. He then claims that he is angry that his friends never say that they remember him when he died. The character was taken out of the series in the fifth season of the episode "Kenny Dies", but returned in the following season at the end of "Red Sleigh Down" and has since been a regular character; Now he dies only occasionally. In most episodes of the 10th and 11th season, he rather recedes into the background, although this tendency seems to have ended with the finale of the 11th season. Kenny did not die once during Season Twelve. Kenny died three times in Season 13 and five times in Season 14. 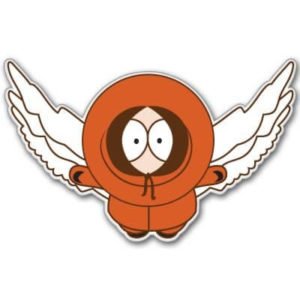 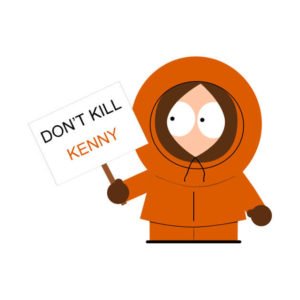 Kenny wears an orange snorkel parka, orange pants and brown gloves. Almost all the time Kenny has his hood on, so only his eyes and (invisible) nose are visible. Underneath his hood, he has messy blonde hair that looks a bit like Tweek Tweak, another character in the series. Occasionally, usually when he's scared or crying, he pulls the strings on his hood to make them firmer, even though he did that once Cartman was farted in a confined space. In "South Park is Gay," Kenny wears a light violet parka with some hooded hair, black pants, and brown boots with black stripes. Later in the episode, he buys another parka, which is pink and fluffy.

It is sometimes shown that he has almost nothing under his parka, as shown in the episodes "The Tooth Fairy Tats 2000", the movie "Lil 'Crime Stoppers" and "Lice Capades", Kenny has blue eyes in the episode "Starvin 'Marvin," in which a mutant turkey pulls his eye out and in a close-up, a blue iris is visible for a moment. However, in an early draft for South Park: Bigger, Longer & Uncut, Kenny is described as hazel-brown. The film and "A Very Crappy Christmas" show that Kenny sleeps in his underwear, making him the only boy to do so, even though he suspects his family can not afford it (Kyle, Cartman, Stan and Butters wear it Pajamas and Tweek Tweak rare) sleeps and therefore has no pajamas, except in "Child Abduction is not funny").

In other episodes, however, he is shown asleep in his parka. It seems that his parka was made from parts of his bedroom curtains, because in the episode "Quintuplets 2000," in which Kenny plays opera, we see his curtains in the background. They are made of orange material and a large part is missing. After South Park: BLU he is unknown in several episodes. In the episode "Super Best Friends," where Stan discovers that Kenny drowned to death in the pool, he's bald because every kid in the episode shaved his head earlier, making him no different from the others ( less Cartman).

In "Margaritaville," when the boys play with squirrels, Kenny wears a portion of his "toga" (a leaf) over his face and mimics the way his parka covers his face. Other parts of his face - and his hair - are still visible, as in "W.T.F." When in wrestling outfit, he wears headgear that covers most of his face. In the same episode, he wears a mask that also covers most of his face when he plays his wrestling alter ego El Pollo Loco (a parody of Mexican wrestler Rey Mysterio). In "The Losing Edge" he wears a baseball cap covering a piece of his right eye and forehead (and a jersey number 13). He looks the same in the original Christmas short, but wears green gloves and a red scarf. His mouth is visible and his voice is understandable (it sounds a bit like Craig or Clyde).

He has only one line. A photorealistic version of Kenny's Performance was produced as a sketch by a police artist for the episode "Free Willzyx," which shows his nose.