You need the following items for your Randy Marsh Halloween costume: 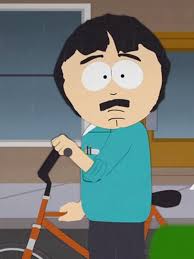 Randy Marsh is the son of Marvin and granny Marsh, the half brother of Jimbo Kern, the husband of Sharon and also the father of Stan and Shelly.

He first appeared in the first season, "Volcano," and is voiced by Trey Parker.

Randy wears a white shirt under a blue jacket with two pockets on each side and pulled-up sleeves. He also wears black pants and black shoes. Under his jacket seems to be a white shirt. In his left pocket is usually a yellow, a red and a blue pin with a pocket protector. With "The Night of the Living Homeless", Randy was redesigned in more detail, such as the pencil and pens in his breast pocket, which changed colors and were no longer presented as simple lines.
He has thick, black hair with a parted pony and a thick black mustache, both reminiscent of a 1970s hairstyle. In early episodes, however, his hairstyle was slightly different (see left). Up to "Chickenlover" he had no chin with nubs. But in and after this episode, he mysteriously developed one (of course, many things changed in the early stages of South Park).

At bedtime, Randy wears a deep blue pajama with a long-sleeved shirt and gray slippers. Although slim and shapely in dress, he is rather flabby and has a protruding tummy as seen on his bare chest. Randy also has testicular prostheses after moving away from self-induced testicular cancer, as seen in Season 14 of "Medicinal Fried Chicken."

In his outfit for special occasions, which consists of a white shirt, a light blue tuxedo, blue trousers and a golden tie, he has a golden handkerchief in his blue coat pocket.