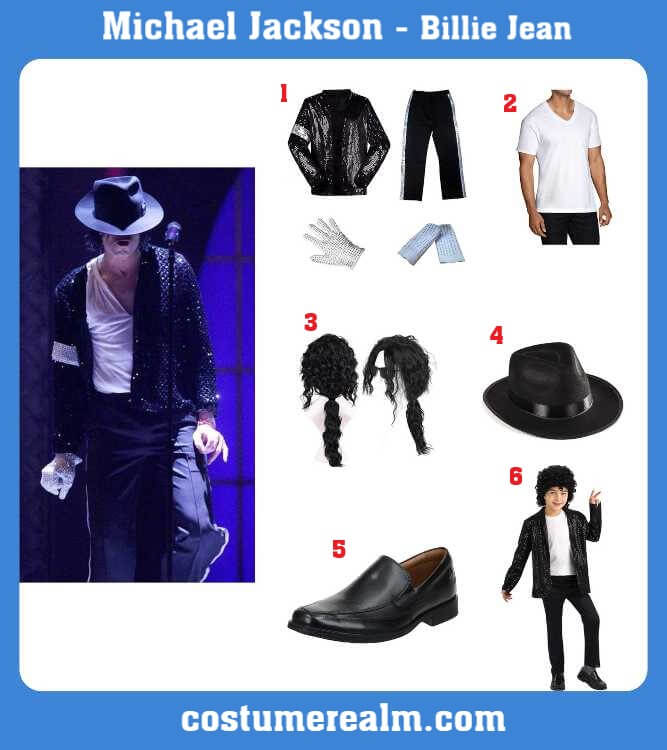 You need the following items for your Michael Jackson Halloween cosutme:

Michael Joseph Jackson, also known as the King of Pop, was an American singer, musician, dancer, producer, writer, and entertainer. Michael was the most awarded musician in history. He has influenced artists of different genres and his contributions to music. His dancing style, and fashion style, have made him a global figure in popular culture for 40 years. He introduced complicated dance moves to the public. Michael was respected outside of music for his frequent humanitarian work, which included donating over $500 million to charities over the course of his life.

Get the look of Michael Jackson by dressing up in his Billie Jean costume, a white v-neck t-shirt, and a gangster hat.

Michael Jackson Billie Jean Costume:  Jackson wore this outfit in his performance of “Billie Jean” on the TV special. The performance was nominated for Emmy. After this performance, he almost always wore the same outfit in his concerts while singing Billie Jean. Except the white t-shirt, there is a low chance you already have other pieces required for this Halloween costume. You may want to look online for the jacket, pants and gloves, just head to a retail store to buy a black gangster hat and black slip-on loafers if you don't already have.

The music video was elevated from a promotional tool into an art form by Michael. He made videos for songs like Billie Jean, Beat It, and Thriller, which has been voted the best music video of all time. The Thriller video is the only music video in the national film registry in the Library of Congress. He was the first African-American artist to garner a strong crossover following on MTV. The music videos of Michael have turned MTV and Cable TV into successful ventures. The robot and the moonwalk are two complicated dance techniques that he popularized. Michael's unique musical style, vocal style, and choreography continue to transcend generational, racial, and cultural boundaries. Michael had a median fundamental Frequency of 130 hertz, which was reported by a study.