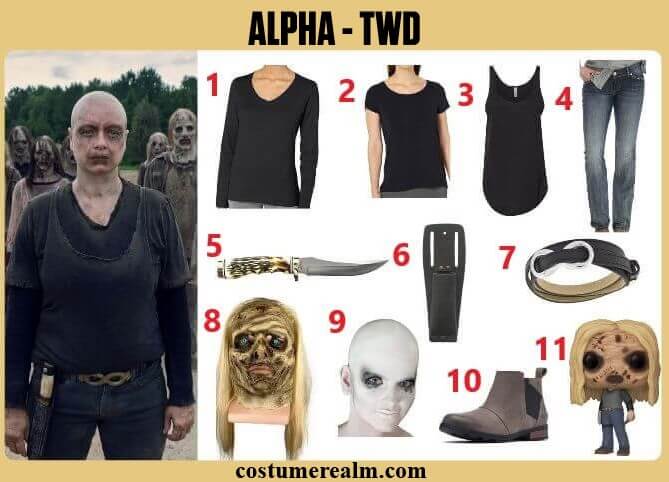 You need the following items for your Alpha Halloween Costume:

How To Dress Like Alpha From The Walking Dead 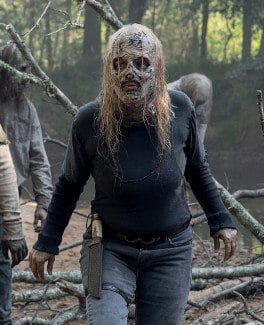 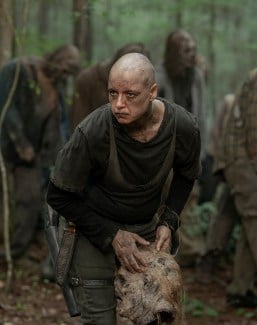 Alpha is a main character and an antagonist, as well as a survivor of the outbreak in AMC's The Walking Dead. She was the leader of the Whisper and the mother of Lydia. It is portrayed by Samantha Morton.
Alpha is a highly intelligent, cold, psychopathic, sadistic, cunning and self-centered woman who is a hard-nosed, determined survivor and a strong leader for the members of her group.

Alpha was the leader of the Whisperers, a group of survivors who disguise themselves with traveling skins to live in the shade and remain invisible to others. She was also the main opponent of season 9. Alpha's dark past is shown in flashbacks; It is revealed that she killed her husband Frank and her group of survivors in the early stages of the outbreak because she believed they were "weak". She shows up with some members of her group on Hilltop and asks the community to return her daughter Lydia, who owns the Hilltop community.

It is later revealed that the Whisperers murdered and beheaded several key members from each community to warn Daryl and the others against entering their territory. The heads of the beheaded members were placed on spikes and marked the border.

About Alpha From The Walking Dead

Despite its extreme methods of survival, Alpha is a strong survivor and its effective leadership has kept many people alive and reaffirmed the belief that their wild ways make people stronger. However, she doesn't seem to care for her whisperers personally, and Lydia herself reveals that those who have been lost, captured, or killed are left behind and no attempt is made to save or avenge them.

It will quickly murder all members who question their decisions. Her lack of personal care for her group was exemplified when she almost allowed a helpless child in her group to be eaten alive by approaching walkers just because they were crying and viewing the action as part of "natural selection".