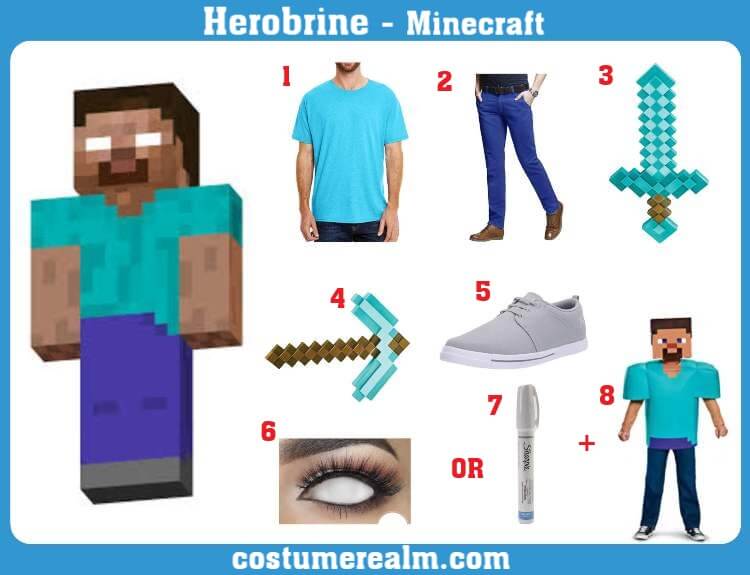 You need the following items for your Herobrine Halloween costume: 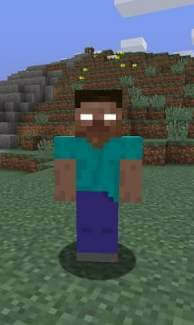 Herobrine's Outfit: Herobrine has the skin of Steve. He wears a turquoise t-shirt, blue pants, and gray shoes.

Herobrine's Eyes: Herobrine has full white glowy eyes. His eyes were probably intended to give him the vigilant look.

Herobrine's Accessories: He usually doesn't carry any items but from time to time he is seen with a pickaxe or a sword. 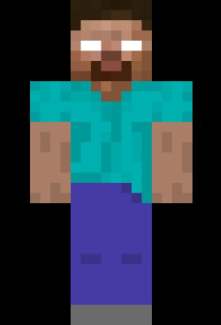 The first story and picture ever posted via Herobrine, as well as the Brocraft stream, are considered canonical. Things posted after these two events are considered fan-made adjustments and variations.

Herobrine is and never has been in unmodded Minecraft. There is no reference to him in the source code, and there is no code that would allow an entity to act like Herobrine. It is not possible that Herobrine ever existed in unchanged clients or servers. All Herobrine appearances are either caused by an installed mod or because another player is using the skin.

From the original creepypasta, Herobrine creates random constructions like sand pyramids in oceans and long tunnels. He also cuts off all leaves from trees.

Herobrine first appeared in a single picture detailing an encounter. The first photo of Herobrine's first Canon sighting was posted on 4chan's Paranormal board in August 2010 but received little attention. It has been said that Herobrine appeared in a single-player game from someone and littered the map with various pyramids and tunnels. The post has since been deleted. It is the first medium to call him Herobrine.

Herobrine didn't gain popularity until later when Brocraft streamer Copeland photoshopped Herobrine into several screenshots to show in his chat. He had recently taken a liking to the story and wanted to be a part of it. After getting mostly good reactions, he decided to stage a joke. He explained exactly how that happened in an email.