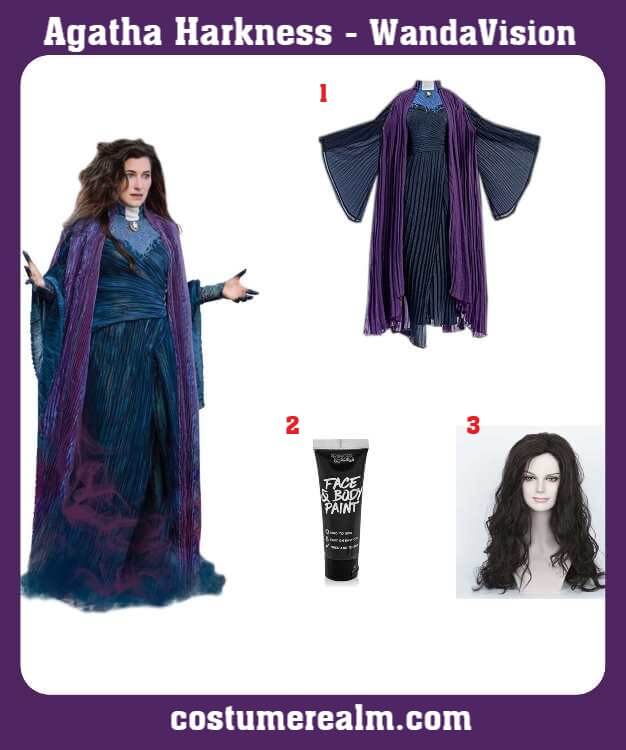 You will need the following items for your Agatha Harkness Halloween costume:

During the Salem Witch Trials, Agatha Harkness was accused of practicing dark magic by her coven. She saw the chaos magic of the Westview Anomaly over three hundred years later. Harkness became obsessed with harnessing Maximoff magic, unfazed by her thrall over the population of Westview.
To get the look of Agatha Harkness, dress up in her cloak suit, Three Graces Brooch which she stole from her coven mother, Agatha Harkness wig, and a suitable gloves or need to paint your fingers.
WandaVision is one of the best Halloween costume idea for families. Along with Agatha, get your family to dress up as Wanda, Vision, Pietro, and Billy to kick the Halloween party as the cutest family. 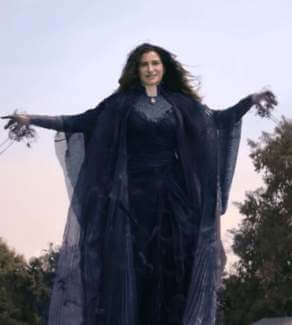 Agatha Harkness Costume: If you want to DIY your costume, firstly, you will want to wear a long strapless dress. This will be the foundation for everything else. You could also add a black waist belt around the waist to give the dress some detail. Then, you should wear a long sleeve blue top. You should wear a black cape with a spider web design. You may finish off her attire by putting on the large blue and purple iridescent cape. Agatha Harkness has a brooch that you can connect to the front of the cloak. Finally, you will need the appropriate wig if your hair is not at the right size to be shaped appropriately. The hair of Agatha Harkness is long and wavy. You can buy a wig that is pre-styled or style it yourself.

Agatha Harkness has been mostly shown as Agnes. With her quirkiness and humor, she was given the main comedic role in the sitcom reality. She is often seen making jokes and comments for laughs. Once she is revealed as the witch Agatha Harkness, her personality becomes more sinister. She sees Wanda Maximoff as undeserving of her abilities and views her contempt for wasting her magic on maintaining the fantasy within the Hex.

Harkness critiques Maximoff for her less than heroic actions, such as her time in HYDRA and her imprisonment and torment of the citizens of Westview, further attempts to plant more seeds of doubt. When Agatha believes she has the upper hand, Harkness mocks her. This is her undoing, as she unwittingly gives Maximoff the idea to use her original protection spell against her.