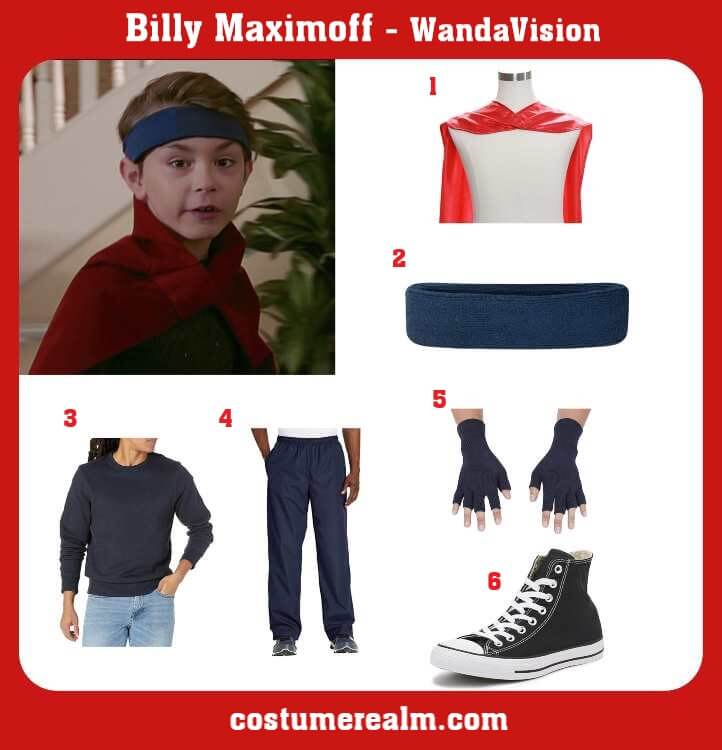 You need the following items for your Billy Maximoff Halloween costume:

Billy was the twin brother of Tommy and son of Wanda and Visoin.  He was captured by Agatha Harkness after being targeted by S.W.O.R.D.  During the Battle of Westview, he was freed and was able to defeat the S.W.O.R.D. agents.  After the battle, Wanda dispelled the Hex, which caused Billy and his brother to disappear.

Get the look of Billy Maximoff by dressing up in a red superhero cape, a navy-blue headband, and dark navy wind pants.

WandaVision is one of the best Halloween costume idea for families. Along with Billy, get your family to dress up as Wanda, Vision and Pietro to kick the Halloween party as the cutest family.

Billy Maximoff Costume: One of the best things about this Halloween costume idea is that you can wear most items after Halloween, or you probably already have them in your wardrobe.  If you don't already have a dark-colored sweatshirt, navy wind pants, fingerless gloves and high top sneakers, just head to a retail store where you can find them. Check a local costume shop for a red superhero cape to complete your easy costume.

Just like other heroes in WandaVision Halloween special episode, Billy dressed up as himself (Wiccan) on Halloween. It is the comic version to be more accurate. In the comic, Billy first called himself "The Asgardian God"  that's why some fans thought, Billy was Thor in the Halloween special episode.  The costume he's wearing is more reflective of his character's evolution than just his abilities.