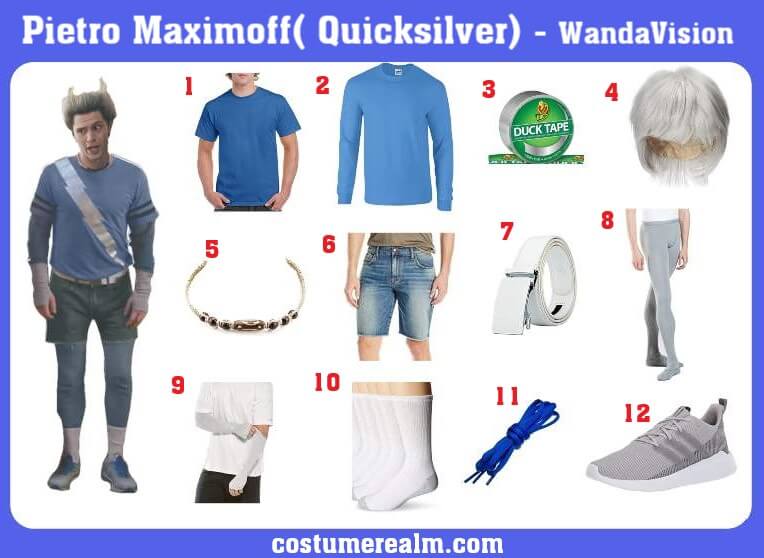 You need the following items for your Quicksilver / Pietro Maximoff costume from WandaVision: 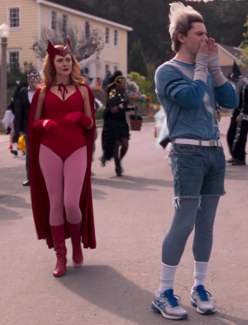 Pietro Maximoff Outfit: For your Pietro Maximoff costume you need a blue short-sleeve t-shirt and again a blue but different toned long-sleeve t-shirt. To give your short sleeve the right look, you need to Quicksilver's symbol of lightning. You can use silver duck tape for that. For the bottom, you need denim shorts and blueish grey tights.

Pietro cares a lot for Wanda and the two had a deep bond, although they would occasionally quarrel like normal siblings. He took care of his sister and relied on her for support. At the same time he was very loyal to her and protected her that he was ready to kill Hawkeye when he incapacitated Wanda with a shock arrow. Wanda was devastated by Pietro's death from Ultron to the point where she told Ultron that she had just "died".

Pietro Maximoff came from Sokovia and grew up with his brotherly twin sister, Wanda. The country, embroiled in constant war and strife, became the base of operations for a HYDRA cell operated by Wolfgang von Strucker, which Pietro and Wanda recruited to take part in a series of tests with the scepter and to give the twins superpowers. While his sister acquired a number of telekinetic skills, Pietro acquired the ability to move at supersonic speeds.