You need the following items for your Alicent Hightower Halloween Costume:

Other Outfits Worn By Alicent Hightower 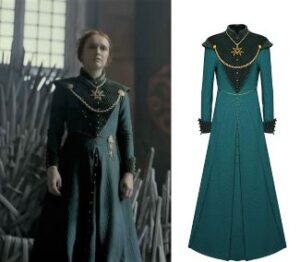 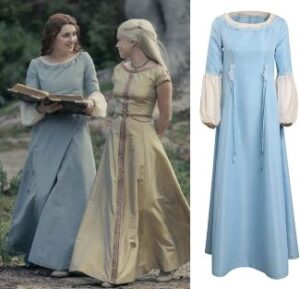 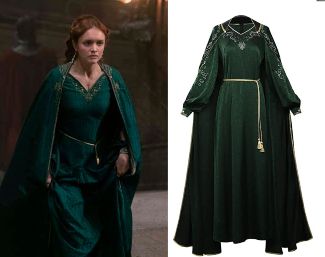 How To Dress Like Alicent Hightower From House of the Dragon

Alicent Hightower Costume by House of the Dragon;

The costumes of the House of Dragons appear to be loosely inspired by the Renaissance. To be fair, we can only see the lace of Alicent's dress. It's hard to analyze a costume that doesn't fit head to toe, but as far as we can tell from the trailers, we've prepared a nice combination.

To dress like Alicent Hightower you need the products that we have prepared for you. You can reach the products from the top of our page. 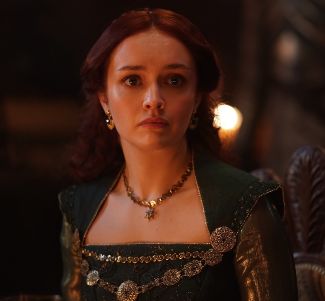 Alicent Hightower was a member of the House of Hightower who, at the age of 18, became the second wife of King Viserys I Targaryen. She is also the daughter of Ser Otto Hightower, Hand of Viserys.The 2013 novella The Princess and the Queen, later adapted into Fire & Blood, described Alicent as "precocious at fifteen and clever and lovable at eighteen".After 4 births, Alicent remained as slim and graceful as before the first pregnancy.

Originally, Queen Alicent had a good relationship with her stepdaughter, Princess Rhaenyra Targaryen. However, the princess and queen recount how tensions began.At the grand tournament held at King's Landing to celebrate the 5th anniversary of Viserys and Alicent, the queen wore a green dress for the opening feast, while Princess Rhaenyra dressed in the Targaryen sigil colors of red and black. Thereafter, it became common to refer to green and black when speaking of the queen's party and the princess's party, respectively.In the books, Alicent is said to be 9 years older than Rhaenyra. At the start of House of Dragon, Alicent is said to be around 32 years old. But it seems they changed the story on purpose so that they are the same age.